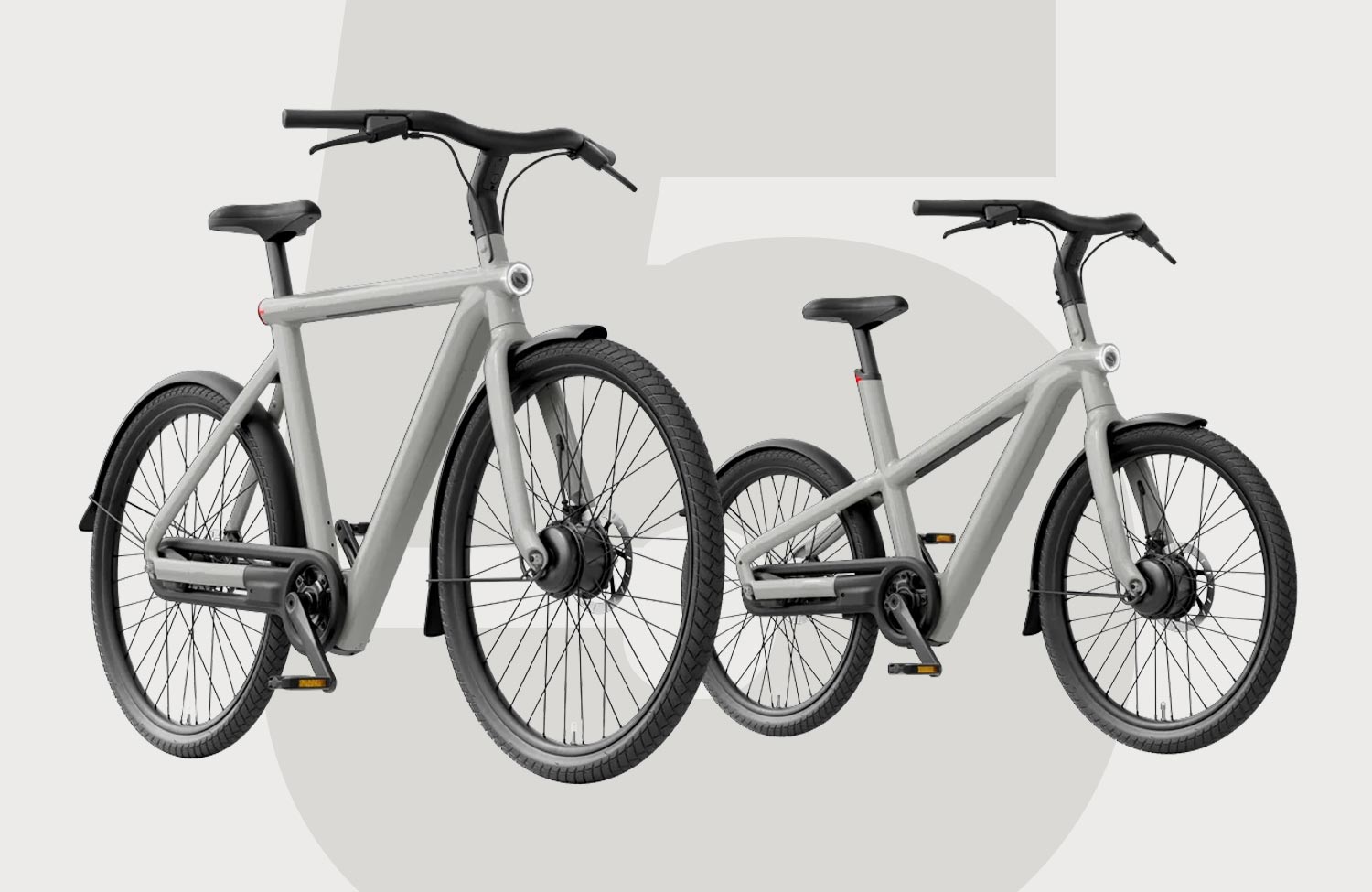 The new VanMoof S5 comes with a torque sensor — and as A5 with a low-step frame.

After three comes five: Although the assumption was that the successors to the popular e-bikes S3 and X3 would be called S4 and X4, VanMoof surprises us today with the number jump to five. So the new bikes VanMoof S5 and VanMoof A5 were introduced — since they also dropped the X designation, but more on that later.

The reason for omitting the four is probably the Asian region and the associated tetraphobia: a superstitious fear of the number 4 is widespread there. For VanMoof, by the way, this was already reason enough to omit the four from the non-electric bikes. And the fact that they also overtake the competitor Cowboy with its model C4 by one number, certainly also speaks for this number jump 😉

Much more interesting than the new name, however, are the bike’s new features – and there’s plenty to report here. Let’s start with the looks, which aren’t all that different from the predecessor. The basic shape of the VanMoof S5 remains the same as the S3, so we have a classic diamond frame with a horizontal top tube.

The lighting system is again integrated into the frame, which is one of the classic design features of VanMoof. But this is where the innovations begin: Headlight and taillight now come with a lateral light strip to be seen better from the side. Also from the front and rear you can now see an elegant light strip that runs along the outer edge of the lights.

S5 and A5 with torque sensor now

Many innovations in the drivetrain: just as VanMoof-typical as the integrated lighting system is also the hub motor in the front wheel — about whose advantages and disadvantages can still be argued. This was further revised for the new model generation as “Gen 5 motor” and is now to be “ultra quiet”. In addition, it should offer a powerful boost (boost torque 68 Nm) and be more efficient in power consumption. VanMoof also explicitly talks about a torque sensor, which would mean a real novelty: until now, there were only fixed driving modes here, regardless of the pedaling force. With its new sensor, the S5 and A5 should feel much more natural while riding. So there is a clear progress here!

Together with a new e-shifter, the VanMoof should now achieve significantly better shifting than its predecessor. We remember: when we first tested the VanMoof S3, we noticed that the gears shifted abruptly even when the pedal was fully depressed, which was acknowledged with a loud crash. However, the new gearshift now only offers three gears, whereas the predecessor had four.

The chain case is now an integral part of the frame and has a new chain guide, which results in a slimmer overall appearance. Thus, VanMoof relies again on the classic bicycle chain and still does not install a drive belt (which would bring through the chain guard but also no huge advantages).

Everything is controlled from the handlebars, the matrix display on the top tube is no longer there. Instead, two so-called Halo-LED rings are embedded in the handlebars, which provide information about acceleration and battery status, for example. Not as a concrete numerical value, but rather as an indicator with different light modes.

In addition, VanMoof’s app has been fundamentally revised and can now be placed centrally and in landscape format on the stem with an optional smartphone holder. The SP Connect system is used for this purpose, which we have already tested here. In addition, the smartphone can also be charged, but not wirelessly as in the competitor Cowboy. VanMoof offers a USB-C port, which allows connecting the smartphone via cable if necessary.

VanMoof A5 with compact frame

As mentioned above, there will be no reissue of the previous X5 with its iconic X-frame. Instead, the successor VanMoof A5 offers a completely new frame with a low-sloping top tube for easier mounting and dismounting from the bike. In keeping with the more compact design, the wheels are also only 24″ in size, while the S5 now rolls up with 27.5″ tires (previously they were 28″).

VanMoof names a suitable body height of 155 to 200 cm for the A5. The S5, on the other hand, is rather intended for riders between 165 and 210 cm. Thus the new A5 and S5 also remain with a single frame size per model. The same applies to the frame color this time: at the start, both bikes are only available in gray. Incidentally, the weight of both bikes is in the same range as its predecessor: the A5 is said to weigh 22 kg, the larger S5 23 kg.

In addition to the size of the two bikes, they also differ in their battery capacity: the battery in the VanMoof S5 offers 487 Wh, which is slightly more than the 463 Wh in the VanMoof A5. The ranges are thus supposed to be between 60 km and 150 km or 55 km and 140 km (in full power mode and economy mode, respectively).

In addition to the aforementioned innovations, there are also many smaller updates — all in all, almost no component is supposed to be the same as the previous generation. In terms of theft protection, the kicklock on the rear wheel has also been revised, and GSM and Bluetooth location tracking as well as support for Apple’s Find My network are mentioned as tracking features.

Both new VanMoof bikes are available immediately at an introductory price of 2,498 euros, making them 150 euros more expensive than their predecessors. Delivery is then scheduled for July. Accessories, such as a new external battery, carrier options for front and rear should also be available at this time. More information about the two new products is available directly at VanMoof’s website.

6 thoughts on “The new VanMoof S5 comes with a torque sensor — and as A5 with a low-step frame.”