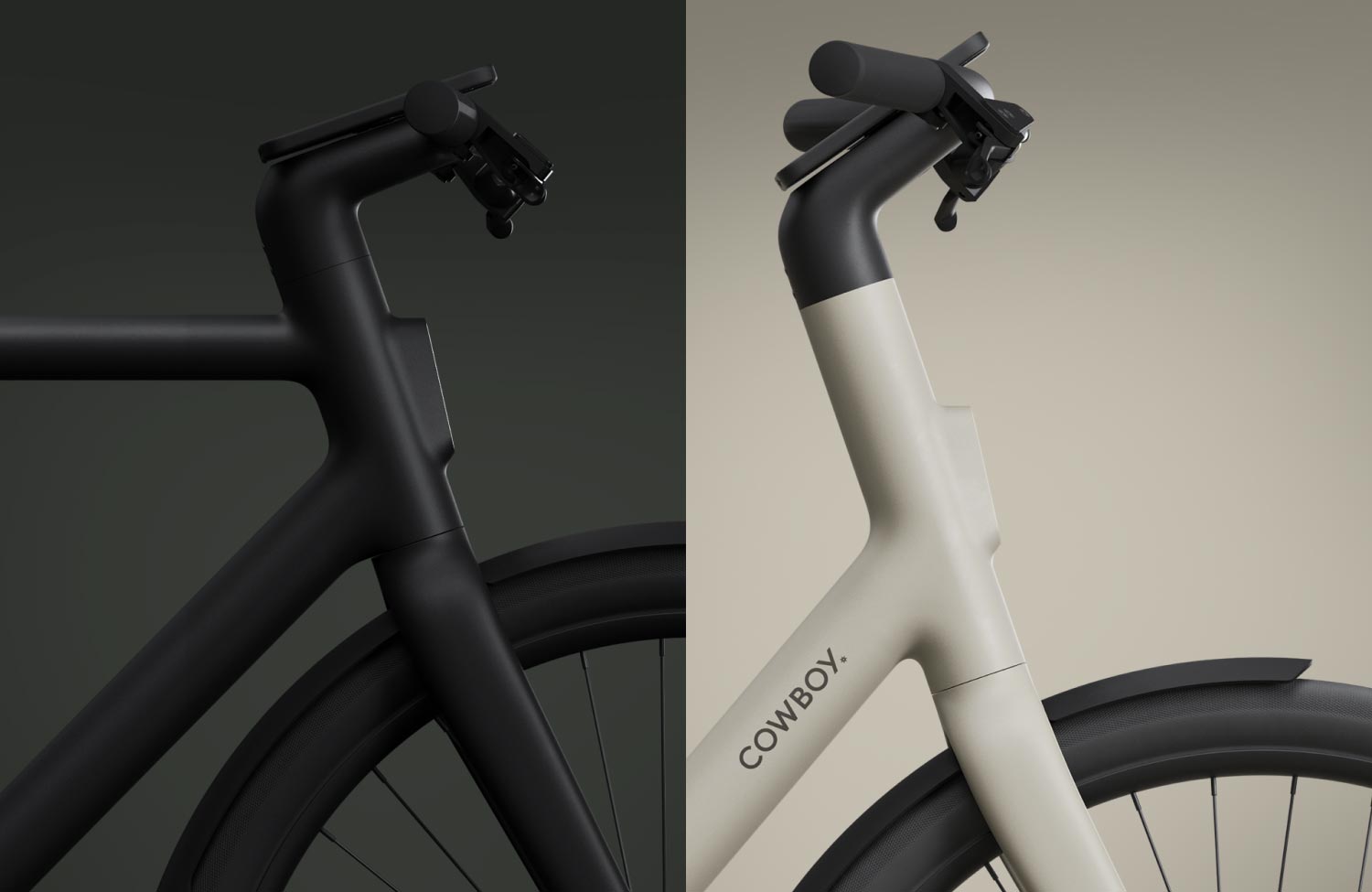 Okay, so now all the details about the new generation Cowboy bike are known and can be seen on Cowboy’s website. And in fact, most of the previously leaked info can actually be found in the new bikes. So, in addition to the familiar diamond frame, a second model with a comfort frame is coming. However, this will not be called Cowgirl, as speculated!

The new low-entry frame shape simply gets the addition “ST” for step-through. Seen consequently, this variant is not intended specifically for women – but rather for all those who are looking for a somewhat more comfortable alternative. Accordingly, the seating position on the ST model is clearly more upright, and the handlebars on this model are also bent slightly backwards for more comfortable handling. There are even slight adjustments to the gear ratio of the singlespeed drive: Thus, starting is somewhat more pleasant on the ST model, but it is less designed for top speed.

Furthermore, however, only one frame size is available with each of the new models. With the C4 (so the official name of the new Cowboy generation) this is to fit riders between 170 and 195 cm height, with the new C4 ST for riders between 160 and 190 cm height. Apart from the frame, however, both models are identical in terms of equipment.

The fourth generation of Cowboy bikes uses a newly developed motor that is supposed to offer a whopping 50% more torque – which should be particularly noticeable on inclines. However, the value of now 45 Nm is still in the typical range for hub motors, so you should not expect a huge performance explosion here. However, it is certainly an improvement.

Furthermore, the solid Gates Carbon Drive belt is used as a single speed, a gear shift is therefore still not. The gear ratio is with the chainring / sprocket combination of 60/21 (2.85) in the C4 largely identical to the predecessor model, the C4 ST is with 57/21 (2.71) as already mentioned slightly shorter.

Unchanged is the battery, which offers 360 Wh capacity and is removable as usual — which is one of the unique selling points of the Cowboy in this bike segment.

Over 200 specially designed parts are installed on the new generation of cowboy bikes, including the new handlebars. The fact that this now directs the brake lines centrally into the frame and also has a smartphone mount from Quadlock integrated, was already foreseeable.

But it gets even better: Also integrated into the handlebar stem unit is a Qi charger for wireless charging of the smartphone! Provided a compatible smartphone (and this should apply to most current models), you no longer have to worry about an empty smartphone battery. This concern is certainly not unfounded among Cowboy users; after all, the bike must be unlocked via smartphone before every ride so that it can be used. This process is even easier with the auto-unlock function, which automatically unlocks the bike when the smartphone approaches.

In this context, the improved app should also be mentioned: among other things, it offers a new start screen with information about the weather and air quality on the route, the expected range and battery consumption, and a summary of the last trips. The navigation has been revised, there is live fitness data, and there is also a community feature that allows you to compete with other riders.

But back to the hardware: The handlebars are also used matching brake levers, which are integrated flush into the handlebars. The hydraulic disc brakes come from SunRace. Mudguards are now installed on the Cowboy bikes as standard (and actually directly connected in the frame, as it was already seen here). Optionally, you can order a bundle of rack and stand with – both parts that were not previously available from Cowboy itself!

The tires have been widened again somewhat: they are still supposed to be particularly puncture-proof, but are now a full 47 mm wide (the predecessor’s width was 42 mm). The goal behind this is certainly to gain more riding comfort through larger tires. Also new is the saddle, which now comes from Selle Royale with the Essenza Athletic model.

While the Cowboy 3 was only available in the non-color options Absolute Black, Anthracite Gray and Mineral Gray, the Cowboy 4 is more colorful — at least a bit. The new models are now available in Cowboy-typical black and also in khaki and sand.

Basically, all the innovations mentioned are quite positive — but you also have to be aware of some disadvantages.

On the one hand, this concerns the stem-handlebar unit: this undoubtedly looks great and also protects the brake lines from outside influences. However, you will now no longer be able to mount a different stem or handlebars on the Cowboy. Due to the uniform frame size, many riders had previously made the bike more ergonomically suitable by replacing said components, which will now probably no longer be possible.

Also the weight of the bikes became higher: The C4 now weighs 18.9 kg, which is 2 kg heavier than its predecessor. The C4 ST is even a bit heavier, weighing in at 19.2 kg. In addition to the slightly wider tires, the higher integration of components is likely to have an influence here as well.

The fact that there are now racks and kickstands optionally installed ex works shows that Cowboy listens to the customer’s wishes. But why still no real lighting system (instead of the position light at the front) is integrated into the frame remains a mystery. Perhaps they are simply saving this feature for the next generation. Until then, the position lights will remain, which at least help to be seen well.

All in all, Cowboy delivers a really successful update with the C4 and C4 ST, which makes the bike even more interesting. In particular, the smartphone holder with wireless charging option shows how well and consistently Cowboy implements the topic of smart bikes from the user’s point of view. The new step-through frame is a welcome addition to the familiar model, but it hardly makes up for the disadvantage that there is still only one frame size. Especially due to the lack of options for subsequent adjustment of the bike, you should definitely test ride the Cowboy beforehand. Such test rides should be possible from July, the new C4 generation will then be available from September 2021.

The bikes can already be reserved for a deposit of 100 euros, and the retail price is now 2,490 euros. As options, the bike can still be equipped with the bundle of rack and stand for 99 euros, and there are also matching Quad-Lock smartphone cases (only for iPhones) for 29 euros.

By the way, if you want to save a little, you can still buy the Cowboy 3 bike — this is now sold at a slightly lower price of 2,190 euros (previously 2,390 euros). More info on the respective bikes can be found on Cowboy’s website.

1 thought on “Integrated cockpit and a new Step-Through frame: The smart Cowboy 4 e-bike”