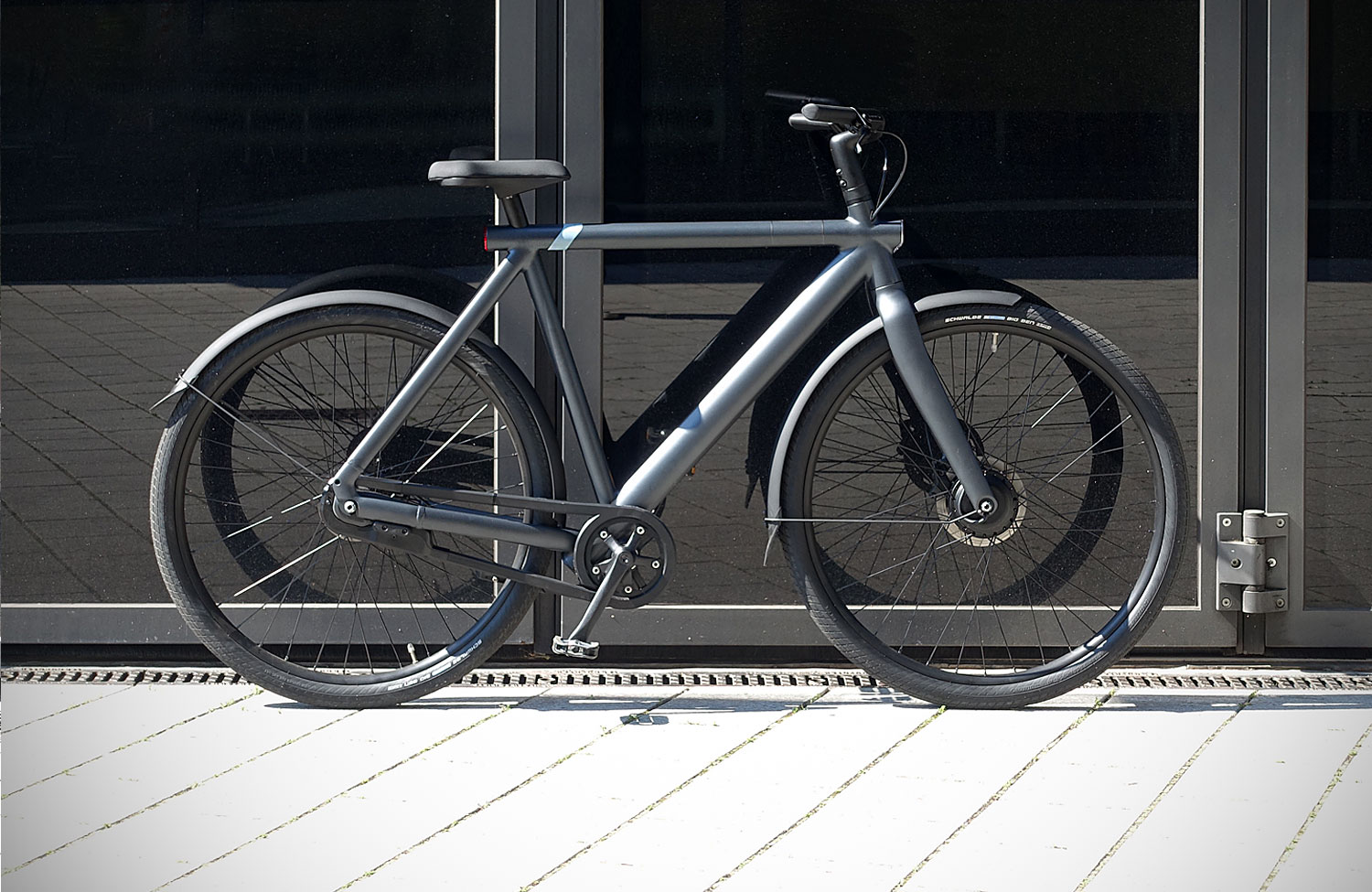 New, smart, electric: our review of the VanMoof S3

VanMoof has recently opened pop-up stores in various cities to launch the smart and electric VanMoof S3. The ideal opportunity to take a closer look at the new urban bike — especially since VanMoof hasn’t yet been able to provide us a model for an extensive test. So here are a few impressions that were gathered during the limited time available for the test ride.

The design of the bike keeps in reality what the clean renderings of the VanMoof website promise: The bike appears to be made of one piece, which is especially achieved by the many integrated components. The handlebars, stem and headset form one unit and even the brake lever holder is in line with the handlebars. The associated brake lines are as short as possible and hardly noticeable.

The same applies to the lighting system: this is almost a traditional design element at VanMoof and is always integrated directly into the frame. The saddle is also an in-house development. Like all other add-on parts, it is kept in matte black and comes without any labels or logo prints. All in all, a wonderfully reserved look that attracts attention because of this reduction.

The S3 from VanMoof is an e-bike that is equipped with a 504 Wh battery mounted in the down tube. The battery is built in fixed, so you have to take the bike to a power outlet to charge it (in case of service the battery can still be removed). This alone is not unusual, the drive of the VanMoof however is: In the front wheel is a hub motor, which is supposed to provide 59 Nm torque. In the rear wheel there is a hub gear with 4 speeds. This is based on a model from Sturmey-Archer, but has been newly upgraded with electric and automatic shifting. This means that the speeds cannot be controlled manually via a shifter, instead the bike shifts automatically after reaching certain speeds. A conventional display is not available on the handlebars, instead a matrix display is integrated in the top tube, which provides information about speed or riding mode, among other things.

Besides the electronic assistance, the S3 comes with commuter equipment suitable for everyday use: In addition to mudguards and the lighting system, a kickstand is also part of the package. Matching racks can be optionally installed at the front and rear. The S3 is equipped with a conventional bicycle chain, which runs in an encapsulated chain box for protection from the weather. And even a bell has been thought of — but not a conventional bell, it is an electronically generated sound (and there are various ring tones to choose from)!

Hydraulic disc brakes are providing the necessary deceleration, whereby the brake discs stand out in particular due to their flat appearance without any drilling. The mentioned saddle can also be moved forwards and backwards, which should allow a proper riding position for as many riders as possible — certainly also due to the fact that the S3 is only available in one frame size (which should fit riders from 170 to 210 cm tall).

Among the safety features of the bike is a mechanical lock that can be used to block the rear wheel. An integrated alarm system is also linked to this: if its sensor registers a motion, the bike alerts you acoustically and with light signals. With the VanMoof smartphone app, the bike can also be tracked, for which a GPS transmitter in the bike frame sends the current position.

As the clean look already suggests, the operation of the VanMoof S3’s hardware is also straightforward: When the bike is locked, the smartphone app automatically unlocks it as soon as the rider comes closer. If no smartphone is available, the bike can also be unlocked manually using one of the two buttons on the handlebars by entering a PIN number. When the bike is unlocked, four assist modes can be switched through while the bike is stopped (no/low/medium/strong assist). While riding, this button becomes a power boost button and delivers maximum power when pressed — but only if the pedals are kept moving while riding. The button on the left hand side acts as a bell button and triggers the electronic ring tone. Further settings are possible via app — among other things, the shift times of the automatic transmission can be adjusted. Due to the short test period, however, the app could unfortunately not be tried out.

The seating position of the VanMoof S3 already reveals a lot about the character of the bike: it is very comfortable! The frame size fits very well at 1.85 m height and you have an upright, comfortable position. The characteristics of the motor also match this: in the strongest support level, the S3 pulls well and allows a speedy ride, but never gives the feeling of great sportiness. Only when the boost button is pressed there is a sudden extra boost, which is quite practical for overtaking or when starting uphill.

Especially in the latter case the disadvantage of a front motor becomes apparent: Due to the weight shift uphill, a short wheel spin is easily possible even on the dry asphalt when using the boost button. Apart from that, the front motor did his job quite inconspicuously: during ordinary riding and on firm ground there was no danger of the front wheel slipping away. Also the noise of the motor was in the usual range — audible, but by no means noticeably loud.

More noticeable, however, was the remaining part of the drive system: on the one hand, a slight grinding noise could be heard already on the first meters, which came from the encapsulated chain box. The chain is probably sagging a little bit here and is grinding a little on the box with every turn. In addition, the automatic hub gears require a bit of getting used to: Basically, the mechanics behind the gears in the VanMoof S3 are comparable to conventional hub gears. For a smooth shifting process, you should take some pressure off the pedal – otherwise you will hear a loud cracking sound from the hub when changing gears. But the problem with the new automatic gearshift system is that the driver doesn’t know exactly when the gears are shifted. Theoretically, you can orientate yourself by the speed indicator on the top tube – but in practice, it is not a solution to keep the speed indicator permanently in view with your head lowered. So there are only two ways to deal with this: either you accept the fact that some gear shifts are not very smooth. Or you adapt yourself a bit and cycle more smoothly with less pressure on the pedal. “Cruising instead of racing” is thus the maxim, which brings us back to the actual character of this bike! The shifting times are predefined by VanMoof, but can be adjusted via app. The gradation from third to fourth gear was felt to be a bit too short on the test bike — but if you can adjust this via app, it’s no real problem. A positive feature of the automatic system is that the gearshift automatically shifts down to first gear when stopping at traffic lights, for example.

The mentioned matrix display on the top tube is quite weak in terms of brightness. On the tested S3 in the Dark color the contrast was still sufficiently strong and the display was mostly visible; on the brighter S3 in the Light color the contrast is lower and the display is even more difficult to read. However, this flaw is to be corrected on the bikes delivered in the final version and a brighter display is to be installed.

The two buttons on the handlebars have a good pressure point and the bell function on the left side is a fun gimmick. The button on the right hand side is not only for the boost function but also for setting the riding modes. Here it seems a bit unhandy that the modes can only be changed when the bike is stopped. On the other hand, you will anyway leave your favorite mode permanently set on recurring routes and for more exhausting sections the boost function is always available at the push of a button anyway.

The 50 mm wide Big Ben tires from Schwalbe can be driven even with low air pressure and then provide a comfortable driving experience, even if the ground is sometimes cobbled. The general build quality of the test bike was very good, all parts looked solid and sufficiently strong for everyday use.

A comfortable city bike with practical features for everyday use, minimum maintenance and many smart functions – this is how the VanMoof S3 can be described. The design of the bike is well done and the build quality looks good. Features like the integrated alarm system make this bike unique and the handling of the electric drive system is quite easy. But there are also a few quirks that take getting used to: The automatic transmission shifts suddenly, which can lead to loud cracking gearshifts when the pedal is pressed hard. The front motor can cause a whelspin while using the boost mode, but you don’t have to worry about riding safety during normal riding. With these characteristics, the S3 is certainly not a sporty bike, but it doesn’t want to be and doesn’t have to be. Because as a comfortable and everyday companion in the city, the VanMoof S3 should do its job with ease. And the comparatively low price of currently 1,998 Euros makes this bike even more attractive!

All further information about the new S3 can be found directly on the VanMoof website.