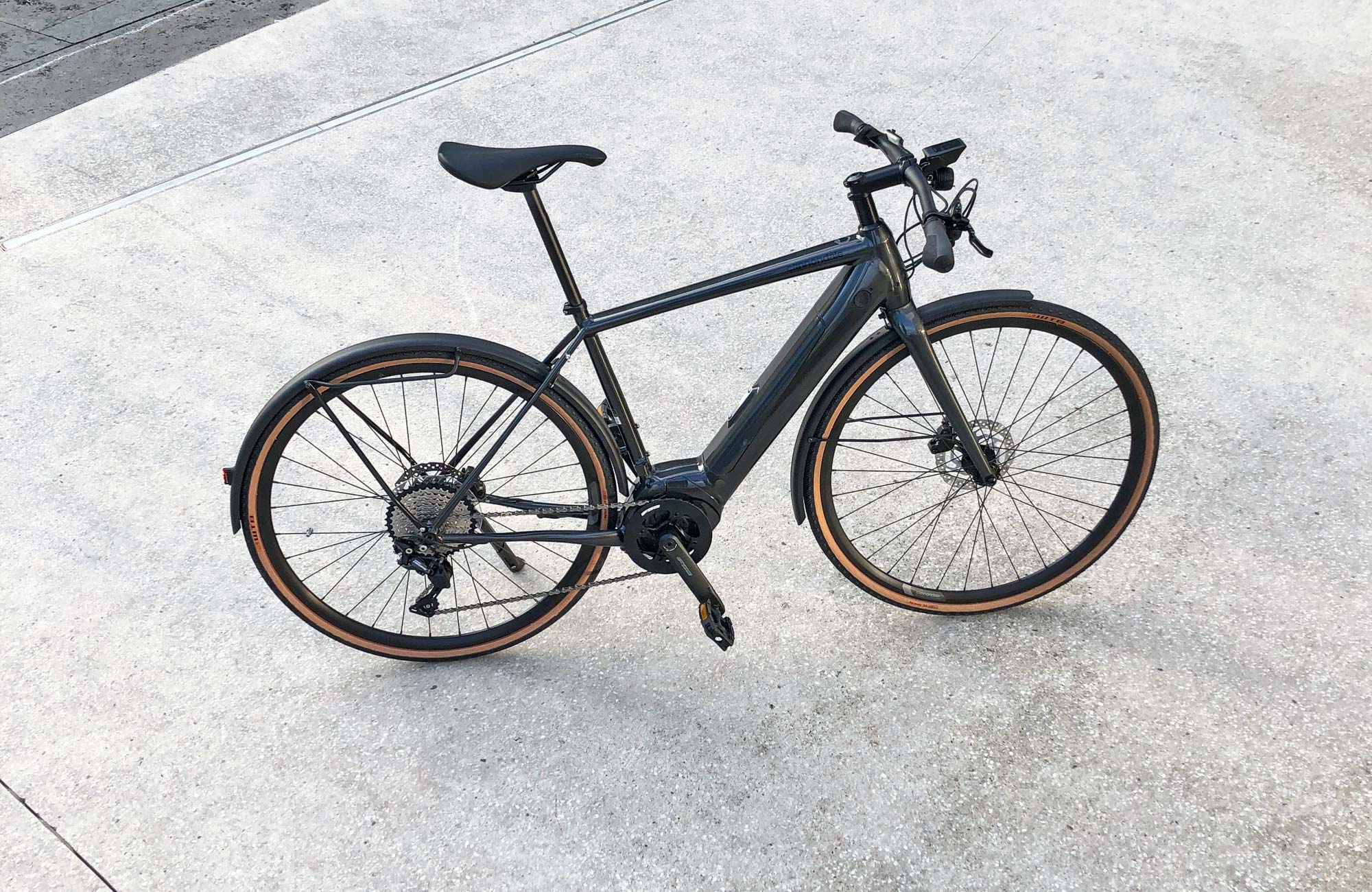 Complete equipment, powerful motor and also a good design: with this successful formula, Cannondale has been sending the Quick Neo EQ into the race since 2019. And to date, the sporty urban e-bike with its all-round qualities is certainly one of the most interesting models in its category. Why this is so, is shown here in the test!

The fact that the electric drive has a major influence on the design of an e-bike is particularly evident in models with powerful mid-motors. Although this type of drive convinces with high performance, the motors with the correspondingly powerful batteries are also quite large in volume, which is not exactly conducive to the appearance of a sporty and elegant bike.

Cannondale proves with the Quick Neo model series that you can still build an attractive bike despite these difficult conditions: Although the clunky motor can hardly be hidden in the area of the bottom bracket, the bike looks very coherent and well-proportioned overall. The battery is integrated into the down tube, the controls of the drive are complete with thumb button and display, but pleasantly compact and unobtrusive.

The same applies to the rest of the extensive equipment: the narrow mudguards fit perfectly to the tires, and the rear mudguard also has unobtrusive but practical holding struts for attaching panniers. The lighting system is also nicely integrated, only the numerous cables and wires on the handlebars leave a somewhat chaotic impression.

The frame of the Quick Neo EQ in dark graphite visually forms a unit with the throughout matte black attachments, moreover, the labeling of the frame is pleasingly discreet — only on the top tube is a black Cannondale lettering. A contrast to this dark look are only the Gumwall tires with their brown flank.

For the Quick Neo EQ, Cannondale uses the Performance Line Cruise motor from Bosch, the more powerful variant of the popular Active Line Plus drive from the third motor generation. Although this motor is slightly weaker and larger than the top model with the addition CX from the fourth generation, it still offers more than enough power for use in an urban bike with a torque of 65 Nm. In addition, this drive is characterized by its smooth running, which the strong CX drive can not offer.

Bosch’s PowerTube battery in the down tube ensures the power supply: this offers a capacity of 500 Wh and can be removed if required. Practical for all those who do not have a charging option at the bike’s parking space. Those who do not know these problems, however, can also charge the battery directly in the bike. The drive system is completed by a thumb button on the handlebars and the center-mounted Kiox on-board computer with color display.

The Quick Neo is equipped with a Shimano derailleur from the Deore series with 10 gears, and the MT200 hydraulic disc brakes are also from Japan. Both solid components that are often found in this class. The tires in 28-inch format comes from WTB and is relatively narrow with 34 mm, which is probably to emphasize the sporty character of the bike.

As the name EQ for equipment already reveals, the Quick Neo comes with a commuter equipment suitable for everyday use. This includes the very stable mudguards from Wingee, whose rear luggage holders carry up to 8 kg load per side. In addition, the rear mudguard also features the high-quality and bright rear light from Supernova. Both attributes also apply to the headlight at the front, also from Supernova with the Mini 2 model. The equipment is then complete the kickstand, which is not a visual highlight, but provides a secure and stable hold.

The Kiox on-board computer was already convincing in the review of the Topstone Neo Carbon 2, and the same applies to the Quick Neo. The centrally installed display is manufactured to a high standard, offers a fine screen resolution and a clear and pretty layout. The time, battery status and riding mode are permanently visible, and various contents such as speed, range, riding time or wattage can be easily scrolled through. This is then done with the handlebar switch, as there are only two buttons on the Kiox itself — for turning the drive on and off and for controlling the lights. The handlebar switch is equipped with five buttons, which can then be used to display the driving mode and display. The pressure point of the individual buttons is excellent, and the overall operation is very simple.

Optionally, the Kiox display can also be used for navigation, for which it can be paired with the smartphone and a suitable app via Bluetooth. The battery can be charged directly in the bike, for which the charging socket is also installed at a convenient height high up on the down tube — so you do not have to bend down far. Alternatively, the battery can be removed completely for charging or storage.

Advantages and disadvantages of the drive system become obvious on the first meters with Cannondale’s Quick Neo in the test: on the one hand, you feel from the start that this motor offers more than enough power — but you also quickly notice the bike’s rather high weight.

At 20.9 kg (weighed ready to ride in size M), the bike is quite light for the equipment offered. However, a bike in this weight class is no longer quite as agile and direct, which is particularly noticeable in tight corners and when changing loads. However, this is complaining at a high level, because the Quick Neo EQ is by no means a lame toad — quite the opposite!

Thus, the motor pushes at will and accelerates you effortlessly up to the limit of 25 km/h. Once there, it decouples barely noticeably and the bike can accelerate further under its own power. In addition to the barely perceptible noise of the motor, the support of the drive on the mountain is also impressive: thanks to the high torque, you should be able to master almost any incline with this bike!

With the current software, the motor offers four riding modes called Eco, Tour, eMTB and Turbo. These provide more power in ascending order, but special attention is paid to the eMTB mode: It converts the rider’s pedaling force very directly depending on the pedal pressure, which ensures a natural riding experience — even if you are riding an urban bike and not a mountain bike, as the name of the riding mode suggests.

On the other hand, the handlebars of the Quick Neo EQ are reminiscent of a mountain bike, which almost overdoes it with the width: with a stately 72 cm, it provides a safe and precise driving experience, but in an urban context it could have been a few centimeters narrower. Somewhat too narrow, on the other hand, are the WTB Exposure tires with 34 mm — these have a low rolling resistance, but could not quite convince in terms of grip on asphalt.

Apart from that, however, the Quick Neo EQ can score points throughout: Thus, not only the brakes, but also the Deore derailleur work precisely and reliably. In addition, the shifting processes are pleasantly quiet thanks to the shift interruption of the drive. The otherwise with many mid-motors encountered banging when shifting under load is largely eliminated here. The ergonomically shaped grips offer a good grip, and the Fabric saddle is also quite comfortable. Due to the wide handlebars, you sit on the bike with your arms stretched out quite far, and the seating position is rather sporty and stretched. And thanks to sturdy attachments and the high-quality workmanship, nothing rattled when riding over uneven ground.

If you are looking for an urban bike with a strong drive system and (nevertheless) good design, you can hardly get past the Quick Neo EQ from Cannondale. Power is more than abundant here, which not only offers advantages on steep roads — this is also a relevant aspect for commuters with heavy loads or for use with a trailer. In this context, the permissible total weight of 150 kg should also be mentioned — which is quite a high value.

However, even those who do not necessarily need the powerful motor might like this bike. At just under 21 kg, it is not a lightweight, but the battery can be removed and has a fairly high capacity of 500 Wh — both are features that are rarely found in lighter bikes.

In combination with the complete equipment, solid components and good workmanship, the Quick Neo EQ offers an attractive overall package that is equipped for almost every requirement. The price of 3,799 Euros is certainly not low, but it is justified considering what you get.

All further information on the Quick Neo EQ is available directly from Cannondale.