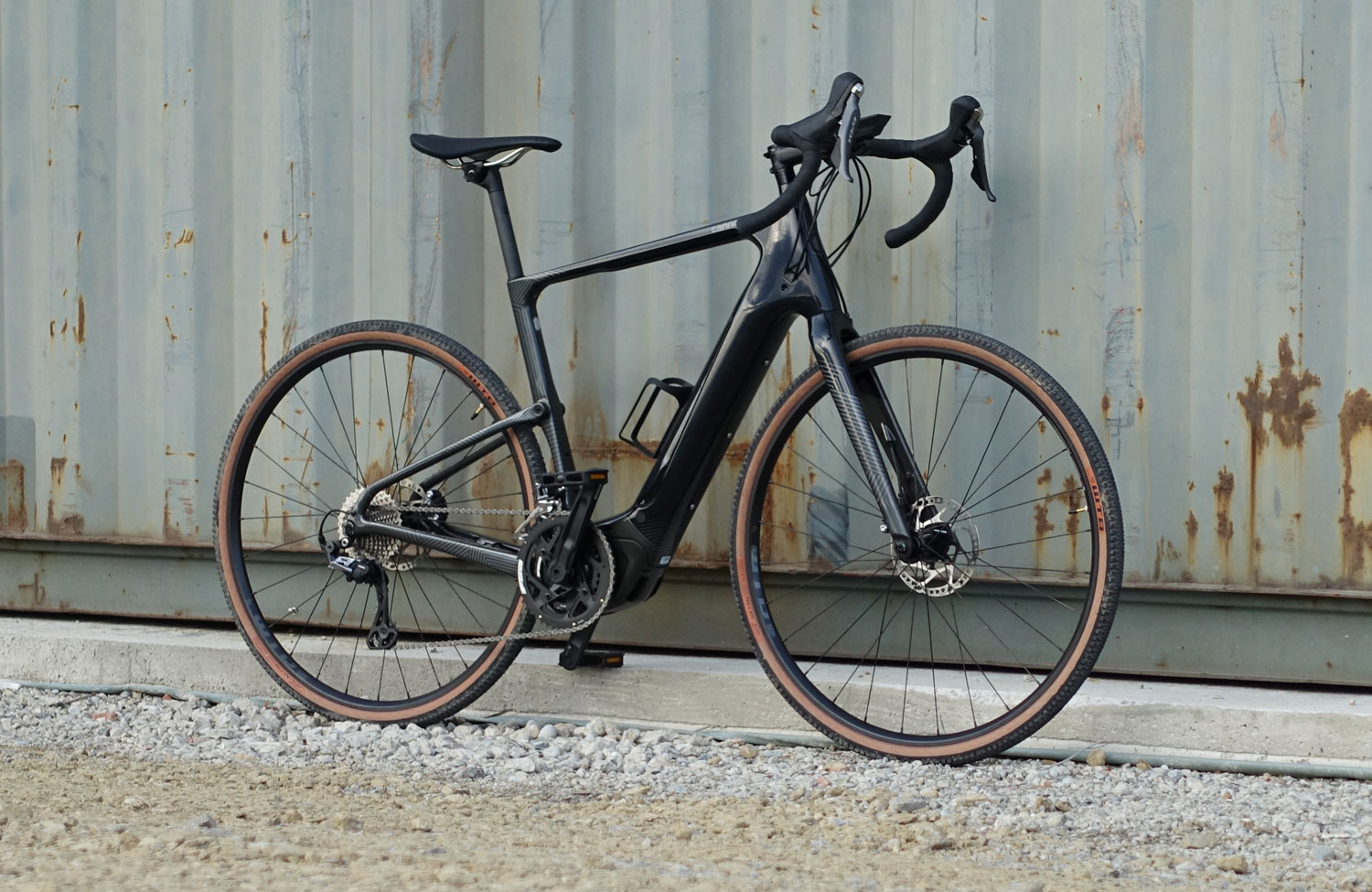 Neither mudguards nor lights, but racing handlebars and off-road tires — Cannondale’s new Gravel e-bike is certainly not an urban bike in the classic sense at first glance. But there are many other qualities to discover that make the bike interesting for a wide range of riders. First and foremost is the combination of a powerful Bosch motor and a carbon frame: despite the relatively heavy drive, the bike only weighs a good 16 kg, which is impressively light. And the cool look of the bike makes the anticipation even greater to subject the Cannondale Topstone Neo Carbon 2 to a detailed test.

Let’s start with the bike’s design: Black Pearl is the name of the bike’s black metallic color, which is combined with some dark gray stripes and lettering — everything is restrained and discreet, so that the frame’s clear design is in the foreground. Thanks to internally routed cables and lines, the appearance is clean and the frame looks sporty and slim — apart from the rather bulky down tube, of course, which houses the removable battery. All other attachments on the bike are kept in matte black, only the tires with brown rubber flanks provides a colorful accent and underlines the gravel character of the bike.

Even if the current Bosch motor is more compact than all its predecessors, it still has a quite noticeable volume. But Cannondale solved the integration of this drive system the best way possible — so motor housing and down tube merge smoothly and form a harmonious unit. The control of the drive is extensive with display and separate button, but still pleasantly unobtrusive.

The heart of the Topstone Neo Carbon is certainly the name-giving carbon frame, which has a very special feature to offer: Cannondale uses the flexible characteristics of the carbon structure in the rear area of the frame, which should lead to a flexibility of up to 30 mm. Kingpin is the name of this system, also recognizable by the thru-axle connection between seat stays and seat tube. A passive suspension element, so to speak, which requires no maintenance and is intended to increase riding comfort.

In combination with the carbon fork, the Topstone Neo Carbon 2 then weighs 16.8 kg in size L. Impressively light, given the electric drive. This one has already been mentioned, but should be mentioned here in detail: Bosch’s sportiest and most powerful Performance Line CX motor is used here, which delivers up to 85 Nm of torque. The battery also comes from Bosch of the PowerTube type, is removably placed in the down tube and offers a capacity of 500 Wh. The control system uses the current Kiox display mounted centrally on the handlebars, and there is also an easily accessible control unit on the left side of the handlebars.

Shimano’s GRX Gravel series is installed as derailleur, here even with two chainrings (48 and 32 teeth) in front. Thus, 2×11 gears are available, which almost seems like too much of a good thing in view of the powerful motor. On the other hand, it is of course an advantage to have these reserves — if you ever need them. The hydraulic disc brakes are also from the GRX series, front and rear discs have a diameter of 160 mm. With 37 mm, the WTB Riddler tires are pleasantly wide to allow a comfortable ride even with less air pressure — in addition, these tires can also be driven tubeless with the WTB rims used.

The handlebar and stem are made of aluminum and come from Cannondale, the seatpost, however, is made of lightweight carbon and comes from Promax. Finally, the saddle Scoop Race Shallow from Fabric with titanium frame completes the equipment.

Another Cannondale-specific feature can be found on the front wheel: the Garmin fitness sensor, which is already known from other bikes from the manufacturer, is installed there. This records all movements of the wheel and sends the data to Cannondale’s app. Thus, speed, distance traveled or calories burned can be displayed on the smartphone. Incidentally, the smartphone does not even have to be connected all the time. The sensor has a memory and remembers the data for up to 30 days before a syncronisation with the smartphone is necessary.

Compared to the now somewhat antiquated Purion display, the Kiox display installed on the Topstone Neo Carbon does everything right: a compact casing, contemporary screen design and a very good color display have been combined here. The display is not only informative, but also pretty to look at — for example, the currently activated driving mode is marked with its own color in each case. Time, battery status and riding mode are permanently visible, and various contents such as speed, range, riding time or wattage can also be easily scrolled through. This is done with the handlebar controls, as there are only two buttons on the Kiox itself — for switching the drive on and off and for the light (without function on the Topstone due to the lack of a light system). The handlebar control is equipped with five buttons, which can then be used to control the driving mode and display informations. The pressure point of the individual buttons is excellent, and the overall operation is very simple.

By the way, the Kiox display can optionally be used for navigation, for which it can be paired with the smartphone and Bosch’s app. This function was not tested here, but according to reports, it does not always work as smoothly as the basic functions mentioned above.

The gearshift is — quite typical for racing handlebars — controlled via the brake levers: If you tilt the entire lever inwards, you shift down; a second toggle switch mounted inside the brake lever is then used to shift in the other direction. Sounds a bit complicated, but it works smoothly after a short period of familiarization. From both grip positions of the handlebars, the levers for braking remain easily and safely accessible — important, since you are also on the road with the Topstone Neo on uneven ground, where it is naturally a bit more wobbly.

Coming to the prime discipline of the Topstone Neo Carbon: the combination of the comparatively light overall weight and the almost overpowered drive system make the bike the perfect riding fun machine! Thus, the bike moves extremely agile and direct, which is particularly advantageous in narrow corners.

The motor supports this impression with its enormous torque — and you also like to switch to a lower driving mode in between to reduce the drive’s performance a bit. The noise of the CX motor can be heard as a monotonous and rather low hum in the Topstone Neo under load, which is not really annoying. Compared to the already tested Canvas Neo with the same motor, the shifting processes are quite inconspicuous, especially under load. A loud crack when shifting, as often known from mid-motors, was not so audible here.

With its 500 Wh battery Cannondale attests the Topstone Neo a range of 125 km. Of course, this can hardly be proven in a practical test, as the influences of rider, route and boundary conditions are too different. However, it can be said that the Bosch drive is certainly one of the more efficient models and the range is not unrealistic. This is helped by the fact that the 25 km/h limit is passed quite quickly, at which the electric drive is switched off anyway (and thus does not consume any power). This runs very harmoniously with the CX motor that you don’t really notice a transition. It is the same when the drive starts up again below 25 km/h.

The geometry of the Topstone Neo is quite comfortable: if you grip the handlebars in the upper position, you sit almost upright; in the lower grip it is then already sportier, but still comparatively comfortable. Here, too, one can once again praise the versatility of such a handlebar! Gravel-typical this is also flared down further and thus allows a wider grip position for more control on uneven ground.

Even if the activity of the Kingpin chassis can not be seen with the naked eye (certainly not while riding), so you feel the bike for an apparently unsprung one as quite pleasant and in no way comparable with a hard and stiff aluminum frame. Together with the mounted tires and a moderate air pressure, you can ride quite comfortably even over rough trails.

Cannondale’s Topstone Neo Carbon 2 offers pure riding fun thanks to its high agility: who wants to be sporty on the road, but does not necessarily want to do sports or training is best served with this bike! The seating position is comfortable, the ride comfort comparatively high and power of the electric drive just in abundance. These diverse features make the bike not only interesting for leisure rides; rather, the Topstone Neo is thus actually also a serious option to use it for everyday (commuter) routes.

But then you should ensure a safe parking place, because with 6,299 euros, the bike is also priced in the upper class — but this is relativized by the good workmanship, high-quality components and the wide range of applications. In addition, Cannondale offers the exclusive Kingpin system, which you look in vain at the competition. And who is additionally looking for reasonable arguments to be able to include this bike in his commuter route: It can be installed on the Topstone Neo with an optional triple clamp also mudguards.

All other information about the bike is available on the website of Cannondale. There you will also find the Topstone Neo Lefty models, which are equipped with Cannondale’s unique and single-arm suspension fork.