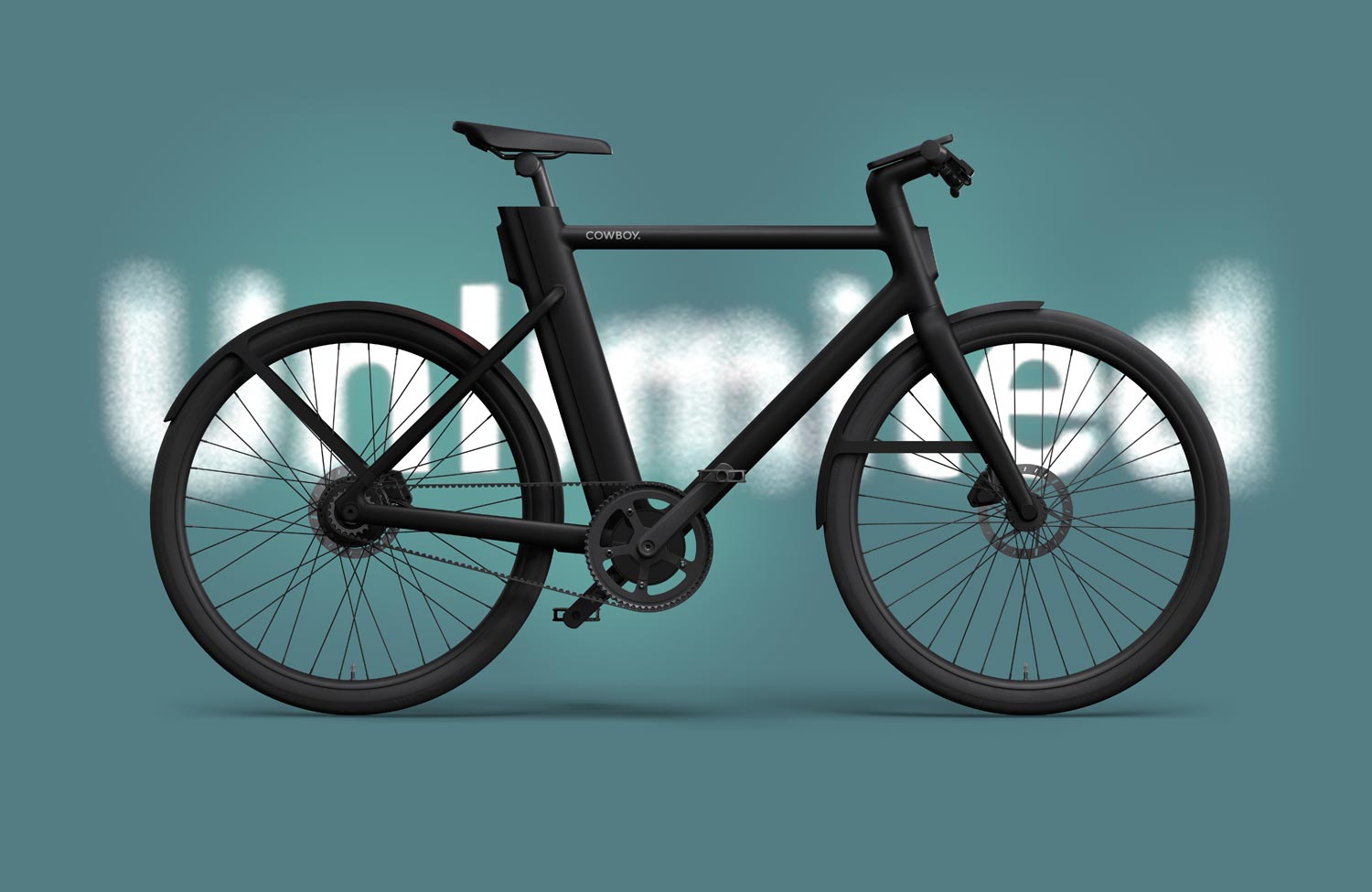 That’s what you call a coup: while the competition from VanMoof has been hinting at an event for a new bike on April 5 with teasers for a few days, Cowboy just gets down to business without further ado: Out of nowhere, the new C4 Unlimited is another variant of the popular smart bike — and it has a lot to offer!

At first glance, you might hardly notice the difference to the regular Cowboy 4, because both bikes are absolutely identical — with one exception! If you take a closer look at the area around the bottom bracket, you will find a quite spectacular innovation: In cooperation with Enviolo, a shift system is installed there, which has not yet been found in any other bike.

Cowboy thus enters new territory twice, because until now all bikes of the Belgium brand were equipped with a singlespeed drive — and thus had no gears at all. Of course, the electric drive is responsible for the fact that the effort required to ride the bike remained manageable.

And although this system works well especially on flat terrain, many prospective buyers may have been waiting for an alternative with gears. This way, especially hilly routes can be mastered much more easily, and in addition, the motor does not have to provide as much support — which should also be noticeable in terms of lower battery consumption. And last but not least, Cowboy probably also looked at the competitors VanMoof and Veloretti, who both equip their bikes with gears.

Enviolo is already known from continuously variable transmissions installed in the rear wheel hub of the bicycle. Instead of fixed gear steps, the transmission variably adjusts the gear ratio. With the addition Automatiq it even takes over the function of an automatic transmission, which we have also already tested here in the Canyon Precede:ON. This means: you do not have to shift yourself and has no shift interruption, the transmission does everything completely automatically.

For e-bikes with hub motor, however, this type of gear hub is not an option, since the motor is already installed at the position in the rear wheel. But Enviolo provides a solution for exactly this application with the Enviolo BB gearbox (BB stands for Bottom Bracket). This new gearbox is installed at the bottom bracket — similar to what we already know from the Pinion gearbox — and can thus also be combined with a hub motor in the rear wheel. With a ratio range of 300% (0.5 to 1.5), the Enviolo BB offers approximately the same ratio range of a Shimano Alfine hub gear with 8 gears or the Pinion system with 6 gears.

The shape of the Enviolo BB is based on the round design of the hub gears, which allows the gearbox to be placed discreetly behind the chainring. You can see the gear housing more clearly on the opposite side — but due to the color-matched casing, it almost looks like an integral part of the frame and thus hardly disturbs the design of it.

One of the most striking features of Cowboys Bikes is certainly the clean design, which has been raised to a new level with the Cowboy 4. In particular, the cockpit with its handlebar-stem unit, completely internally routed cables and the inductive charging option for smartphones is currently quite unique.

However, anyone who is now worried that this cockpit will be disfigured with a disdainful gearshift lever can be calmed down: thanks to the automatic function of the transmission, all necessary settings are made via Cowboy’s smartphone app, so no additional shifter is required on the bike itself.

In addition to three presets (Eco, Comfort and Sport), the desired cadence can also be set in the app. This means that you can define how fast you want to pedal according to your individual preferences. This is done in revolutions per minute, so a value of 65 corresponds to 65 pedal revolutions in one minute. The spectrum of settings ranges from 30 to 90, which certainly covers all preferences.

As already known from the previous Cowboy C4, the Cowboy C4 Unlimited is offered as a diamond frame model and as a version with step-through comfort frame, in this case with the suffix “ST”. The paint finish is currently available in the well-known colors black and sand; however, the khaki color of the regular C4 is not yet available for the Unlimited models, at least not at the market launch.

Speaking of availability: Pre-orders are open from April 8, with delivery scheduled for May 2022. The price for a Cowboy C4 Unlimited with gearbox will be 3,090 euros, which is 300 euros more than the single-speed version. In addition to the price, the C4 Unlimited also adds weight: the gearbox increases this by 1.4 kg, resulting in 20.3 kg on the scales. Apart from the aforementioned innovations, the C4 Unlimited is exactly the same as the regular Cowboy C4 — all further information on the bike can be found in this article.

With the new C4 Unlimited with gearbox, Cowboy should certainly appeal to many interested parties who have so far refrained from the smart bike due to the singlespeed concept — especially since the surcharge for the brand-new and continuously variable transmission is also quite fair. The fact that Enviolo, a well-known and experienced manufacturer, is responsible for this gearbox inspires confidence and gives us hope that this gearbox will also be found in other e-bikes with hub motors in the future.

Update (April 2, 2022): As some have already suspected, we have only made up the Cowboy Unlimited as an April Fool’s joke — so unfortunately this bike will not exist in reality! However, the positive feedback on social media shows that there would definitely be interest in it! 🙂