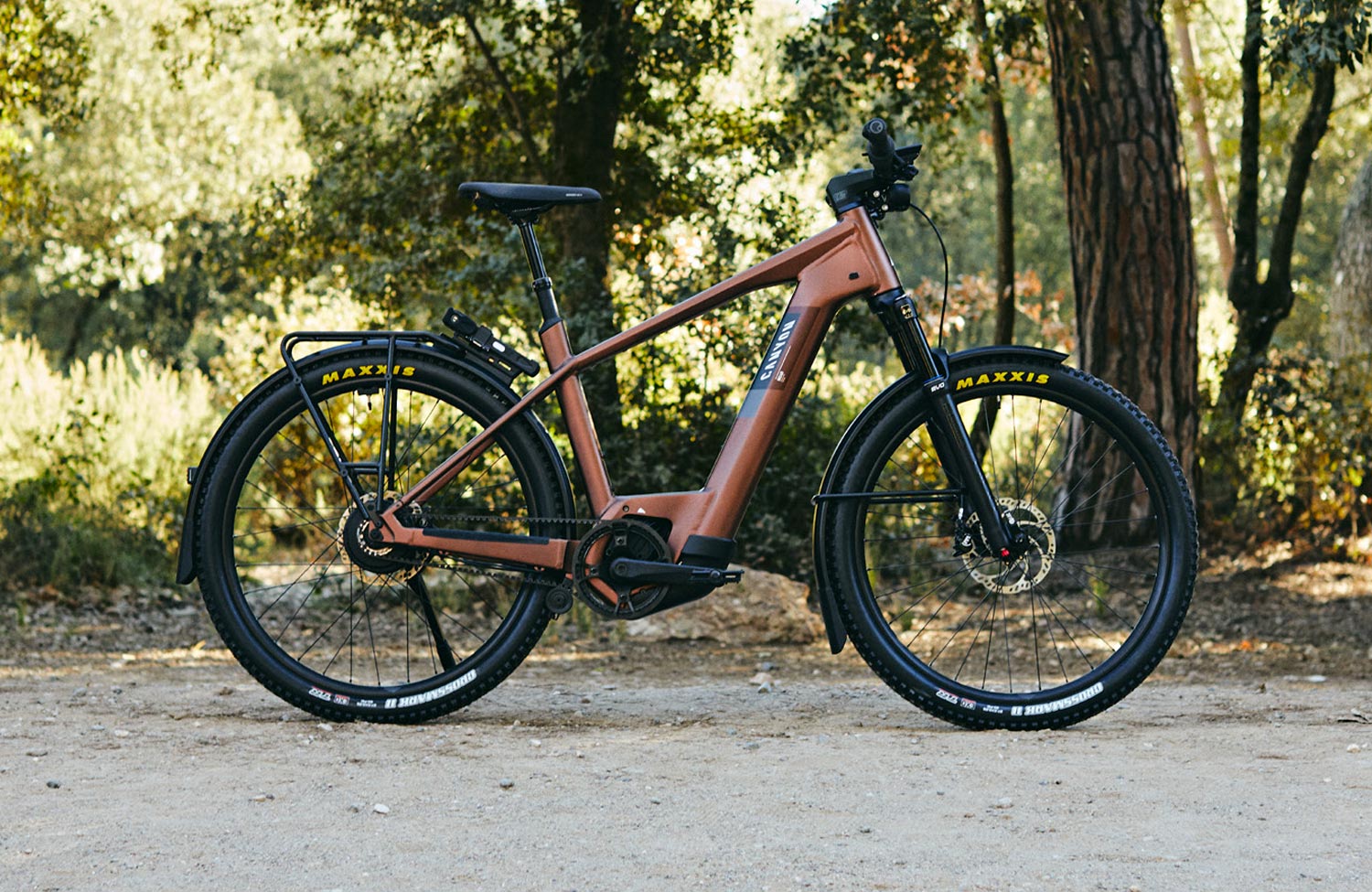 The more the better? Canyon Pathlite:ON SUV — the supersize e-bike

Even though Canyon’s new Pathlite:ON SUV model range is not exactly one of the typical urban bikes, it is definitely worth taking a closer look at this new bike. After all, cars already showed that the SUV vehicle type is also popular in the inner city. Can we expect the same from e-bikes?

To assess the new Pathlite:ON SUV, it is first worth taking a look at the regular Pathlite:ON, which was already introduced last year. A robust and versatile bike that can also be used for trips off paved roads thanks to the suspension fork. For longer tours in between, some models also offer the practical option of using a second battery — to double the range. However, this full range is rarely needed in everyday use and the extra weight of the second battery does not have to be transported around then.

Heavyweight on board: the new Bosch Smart System

A different approach, though, is followed by the new Pathlite:ON SUV — and it is immediately noticeable that this bike looks a bit clunky. The area around the bottom bracket brings back memories of the first e-bikes, where the motors were still comparatively large and looked more like a third-party object on the frame.

Thanks to the large-area cover on the frame, the motor is integrated in the best possible way on the Pathlite:ON SUV — but the Bosch Performance Line CX motor, which is otherwise quite compact, is still rather conspicuously installed. The reason for this can be found in the battery from Bosch’s new Smart System: it offers a capacity of a massive 750 Wh with a weight of 4.4 kg and is somewhat longer in format than the previous battery generation. As a result, the battery takes up the entire space down to the bottom bracket. Consequently, the motor now has to be installed vertically, which makes the electric drive system much more visually striking.

But even if you do not mind the look, you also have to accept a limitation in handling — at least if you want to remove the battery for charging: so the new 750WH battery can only be pulled out down via a flap on the bottom bracket. For comparison: The more compact batteries with less capacity can be removed in comparison somewhat more conveniently on its long side from the down tube.

However, there is of course another side to the coin with the Pathlite:ON SUV: With its huge battery capacity, it will indeed be possible to achieve impressive ranges, and the installed Performance Line CX motor has proven its qualities in recent years anyway. Thus, the drive with 85 Nm torque offers more than sufficient power in almost every situation, works quite efficiently and is certainly audible in use, but not annoyingly loud. Bosch’s new Smart System is completed by a thumb button and the Kiox 300 display, which is centrally mounted on the handlebars. Users can also enjoy enhanced smartphone functionality with Bosch’s new Flow app for smartphones.

Canyon manufactures the frame from aluminum and offers two variants: a comfort frame as a low-entry model and a diamond frame with a high top tube, which, however, quickly slopes down in a line to the rear triangle and even gives the bike an almost sporty touch. Both frames are available in three sizes and two colors each.

The equipment includes a Suntour suspension fork with 100 mm travel (except for the frame size S on the Kofortrahmen, then it is 80 mm) and a suspension seatpost with also 100 mm travel. The fat tires of the type Maxxis Crossmark II with 57 mm width should also provide additional suspension comfort. The mountain bike-typical tread promises good traction off-road, but probably draws more attention to itself on the road with quite high rolling noise. The SUV approach is also reflected here.

The commuter-ready equipment of the Pathlite:ON SUV includes wide aluminum mudguards, a rack with 25 kg load capacity and Ortlieb’s QL 3.1 holding system, as well as a lighting system from Supernova — the top model even with the super-bright M99 Pro 25 headlight. Optionally, by the way, this bike can also be ordered with the Croozer coupling for trailers (the combination of Croozer trailer and Canyon bike has already been tested here).

With and without Belt Drive: Two types of shifting on the Pathlite:ON SUV

The two different drivetrain options available are interesting: the less expensive Pathlite:ON 7 SUV comes with a derailleur from Shimano’s XT series and 12 gears, combined with a conventional bicycle chain. The more expensive Pathlite:ON 8 SUV, on the other hand, relies on the continuously variable Enviolo transmission in the rear hub, combined with Gates’ belt drive — the lower-maintenance variant, but one that is probably also somewhat less dynamic to ride. By the way, the Enviolo transmission is operated manually — it is not the automatic transmission with the suffix Automatiq, which is installed in the Canyons Precedes:ON CF, for example (and which we tested here).

In terms of price, the entry into Canyon’s SUV world with the Pathlite:ON 7 SUV is 4,199 euros, while the Pathlite:ON 8 SUV costs 4,699 euros. For those who actually often use the gained possibilities of the large battery, the new bikes should certainly be an interesting offer – but they also have to live with said restrictions in terms of design and will always ride a pretty heavy bike with 28 kg (Pathlite:ON 7 SUV) or 29 kg (Pathlite:ON 8 SUV) weight. Whether such SUV concepts will prevail among e-bikes in the future remains to be seen — ultimately, this will be decided by the buyers. If we now draw the comparison to the car again, the answer to this seems almost obvious …

All further information on the new Pathlite:ON SUV bikes is available directly at Canyon’s website.