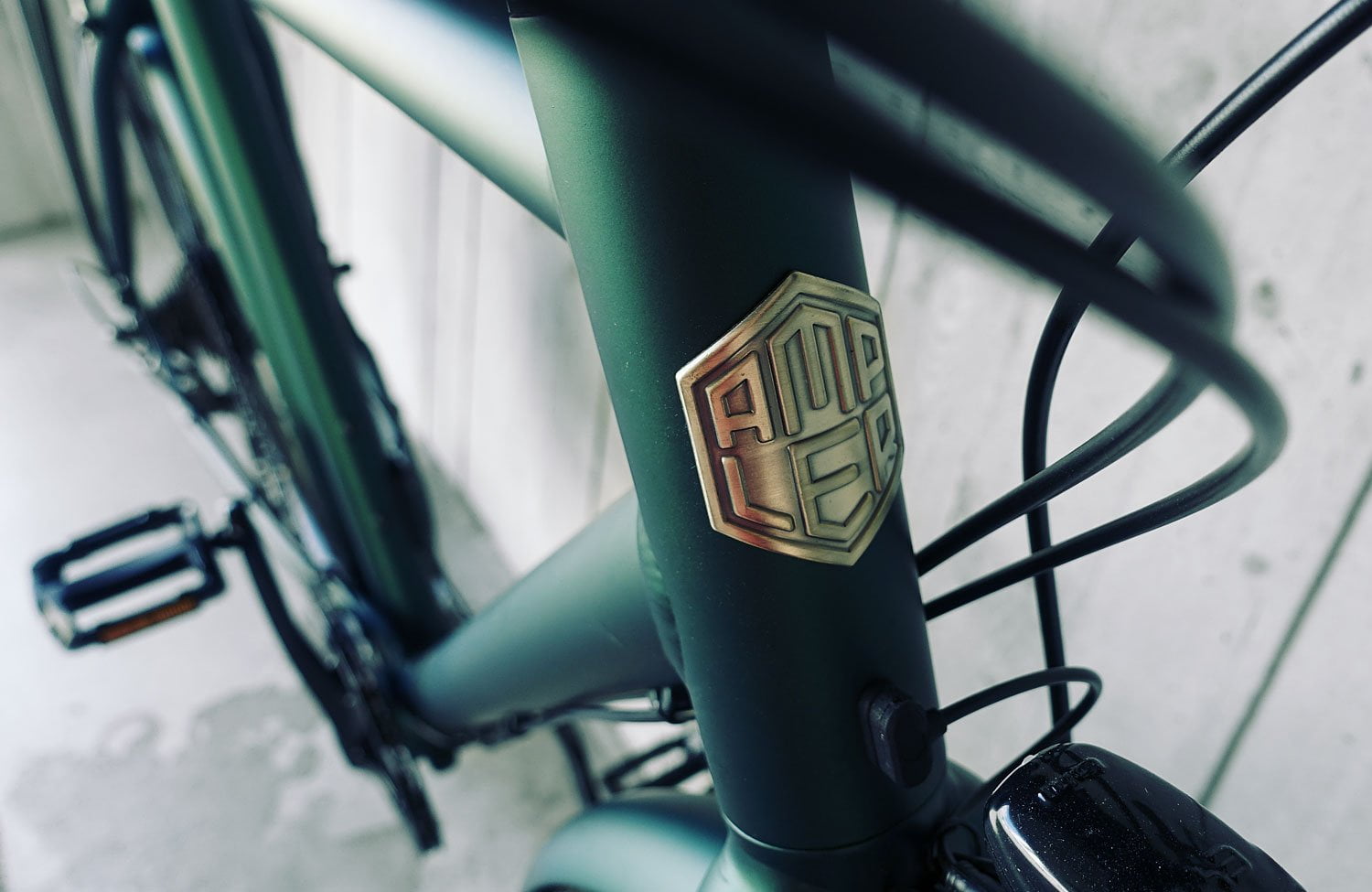 The Ampler Stout being tested: A fully equipped and comfortable e-bike

For several years now, Ampler offers attractive urban bikes with almost invisible electric drive systems. So the Stout tested here is also equipped with a compact hub motor in the rear wheel, the battery sits in the down tube of the frame. The equipment of the Bike is aimed at commuters and therefore includes everything you need in everyday life: mudguards, carrier, lighting, bell and even a kickstand are installed as standard. For the motor control Ampler uses a system with torque sensor, which promises a particularly natural driving experience. The Ampler Stout shows in the test whether this promise can be kept.

Let’s start with the aesthetics: The first highlight is the metallic matt pine green finish, which was introduced this year. With this Ampler offers a nice alternative to the already known graphite grey (which is then glossy), that is really unusual. The fact that the mudguards are painted in the same color as the frame is another beautiful aspect in this context, which makes the bike look as if it has been cast in one piece. The aluminium frame follows the classic diamond frame with a slightly sloping top tube. Due to the relatively thick tubes Ampler hides the battery almost completely – the down tube is hardly thicker than the others. The lower part of the fork is bent, which results in a longer wheelbase and makes it less rigid against bumps.

With the exception of the frame, fork and mudguards, all other parts are completely black – without any annoying logo imprints. Just one of many details that show that Ampler is taking design seriously. Just like with the rear light, which is integrated discreetly into the seat post. So the Stout is a very clean looking bike, especially considering the full features.

Fenders and the pannier rack have already been mentioned, but not their solid design: both are made of metal and securely attached to the bike – there was nothing wobbling or rattling. The pannier rack carries loads up to a weight of 18 kg, a matching strap ( also in black of course ) is included.

In the 2019 generation Ampler uses the Shimano Deore T6000 series with 10 gears: In comparison to the often used Altus gearshift, here the shifting processes are more precise and the shifter itself feels more solid. The hydraulic disc brakes – also from the T6000 series – do their job inconspicuously and are dimensioned adequately. The rear light integrated in the seat post comes from LighSkin; together with the compact IQ2 EYC headlight from Busch+Müller, the bike is equipped with a StVZO-compliant lighting system that is powered by the bike’s battery.

Talking about battery: This one has a capacity of 336 Wh and is fixed. This means that the bike must be plugged into a socket to recharge. However, should it be necessary to replace the battery, it can be removed via an access at the bottom bracket. All e-bikes of this category have this “disadvantage” of the built-in battery – and you should weigh it up according to your own usage profile, how annoying this circumstance is or how often you will actually charge the bike. Ampler itself states a range of approx. 70 km, which turned out to be quite realistic in the test. The motor is a typical hub motor with 250 watts power and sits barely visible behind the sprocket in the rear wheel.

The saddle and handlebars as well as the tyres of the Ampler Stout show their comfortable side in the test: The former is rather softly padded and comfortable, but for some people it might be too soft. The curved handlebar allows an upright and comfortable riding position, keeping the wrists at a comfortable angle. And with its 42 mm width, the Continental Top Contact tyre is not only wide, but can also be driven comfortably with a relatively low air pressure. Thanks to the integrated puncture protection, you don’t have to worry too much about a flat tire.

It is the seemingly small things that make the equipment complete: A stable kickstand is mounted on the bottom bracket, and a bell, which is of course also in black. Pedals are also included with the bike, so you can start out-of-the-box.

Regarding the delivery and commissioning of the bike, Ampler bikes can only be ordered online, which is not a big deal. The bike comes safely packed in a big box and the few necessary assembly steps are done quickly. On the one hand the handlebars have to be positioned and fixed with four screws, on the other hand the pedals have to be attached. Finally, you have to adjust the saddle to the right height and the assembly of the bike is complete. Ampler delivers a box with all the necessary tools – by the way also very nicely made.

Nowadays one of the main aspects of e-bikes is the operation – and there is hardly anything to explain about the Ampler Stout. The bike has neither a display nor controls on the handlebars. Only a button at the base left of the seat tube activates the electrical system. One press turns on the Stout, a long press activates the lighting. To switch it off, briefly press the button again. An LED light ring also informs about the battery status (from green to red). That’s it!

The minimalist operating design has one major advantage: it does not distract from cycling! There are no speed settings that can be changed while riding, no display and not even the indication of the battery status is in the direct view. This corresponds to the concept of the whole bike: Switch on and begin riding – exactly as you would do with a conventional bicycle.

Below the button is the charging socket, which holds the charger plug magnetically – incorrect plugging together is impossible, and the procedure can also be done without paying attention. A simple and elegant solution. What is surprising is that the charging socket does not have a cover – apparently it is also well enough protected against the weather from outside.

The position of this combined button/charging port is also one of the few things you can criticize: For example, it is difficult to switch on the lights while riding, and you have to bend down to the button when starting.

If this minimalism is not enough for you, you can also use your smartphone: the free app for iOS and Android allows you to turn on the bike via Bluetooth and displays all relevant information such as speed and charge status. In addition, it is also possible to choose between two speed levels, which Ampler indicates with 100% and 150%. If you reactivate the bike later with the button and without any action of the app, the last selected setting is remembered. In addition, the app also offers an option for navigation, which worked quite well in the test. However, those who frequently use their smartphone will have to look around for a suitable handlebar mount – this is not included with the bike. All in all, however, the app is worth a compliment as it is easy to use, well designed and performs without any problems.

Let’s get to the driving impression: As mentioned at the beginning, Ampler’s e-bikes have a torque sensor that is supposed to provide a natural riding feeling. The force with which you pedal is measured – if this is low, the engine supports you only weakly. However, if you step on the pedals strongly, you get full electrical support.

This system works flawlessly in real life thanks to a very sensitive motor control system: right from the start you feel the assistance, which begins pleasantly gently and then increases noticeably with stronger pedalling. The setup is very harmonious and rounds off the comfortable feeling, which is also supported by the upright sitting position. This may sound a bit snug, but the Stout is still fast and reaches the speed limit of 25 km/h. Here the electrical support has to be stopped according to the pedelec regulations, which happens largely unnoticeably. The motor turns off so smoothly that you hardly notice it and then offers no noticeable resistance. Above the limit of 25 km/h you can continue to accelerate and keep your speed. If you fall below this limit again, the motor returns just as smoothly. Thanks to the relatively wide tyres, you can roll comfortably over rough roads and don’t have to avoid any small bumps in the asphalt.

Uphill the Stout behaves similar to other E-bikes with hub motor: common gradients are no problem thanks to the 10 gears, but for longer ones from 10% upwards a stronger pedalling force is required. However, since such gradients are rather the exception in the urban environment, most riders are unlikely to experience this.

What is always noticeable, however, is the relatively low weight of around 17 kg. A good value for an e-bike with this complete equipment, which is not only noticeable during the ride but also when you have to lift or carry the bike.

Comfort is King – that could have been the title of the Ampler Stout test. The relatively light e-bike is really comfortable to ride and not only looks like it’s made of one piece. The well-tuned e-drive worked reliably and without problems in the test, the simple operation is just as pleasant as the well thought-out equipment suitable for everyday use. Ampler also scores with the quality of its products: everything is solidly manufactured and nothing rattles. Anyone who can arrange with the built-in battery and the online ordering process will receive an attractive and solid Commuter e-bike for 2,490 Euros at a comparatively low price!

Further information about the bike can be found directly on Ampler’s website. 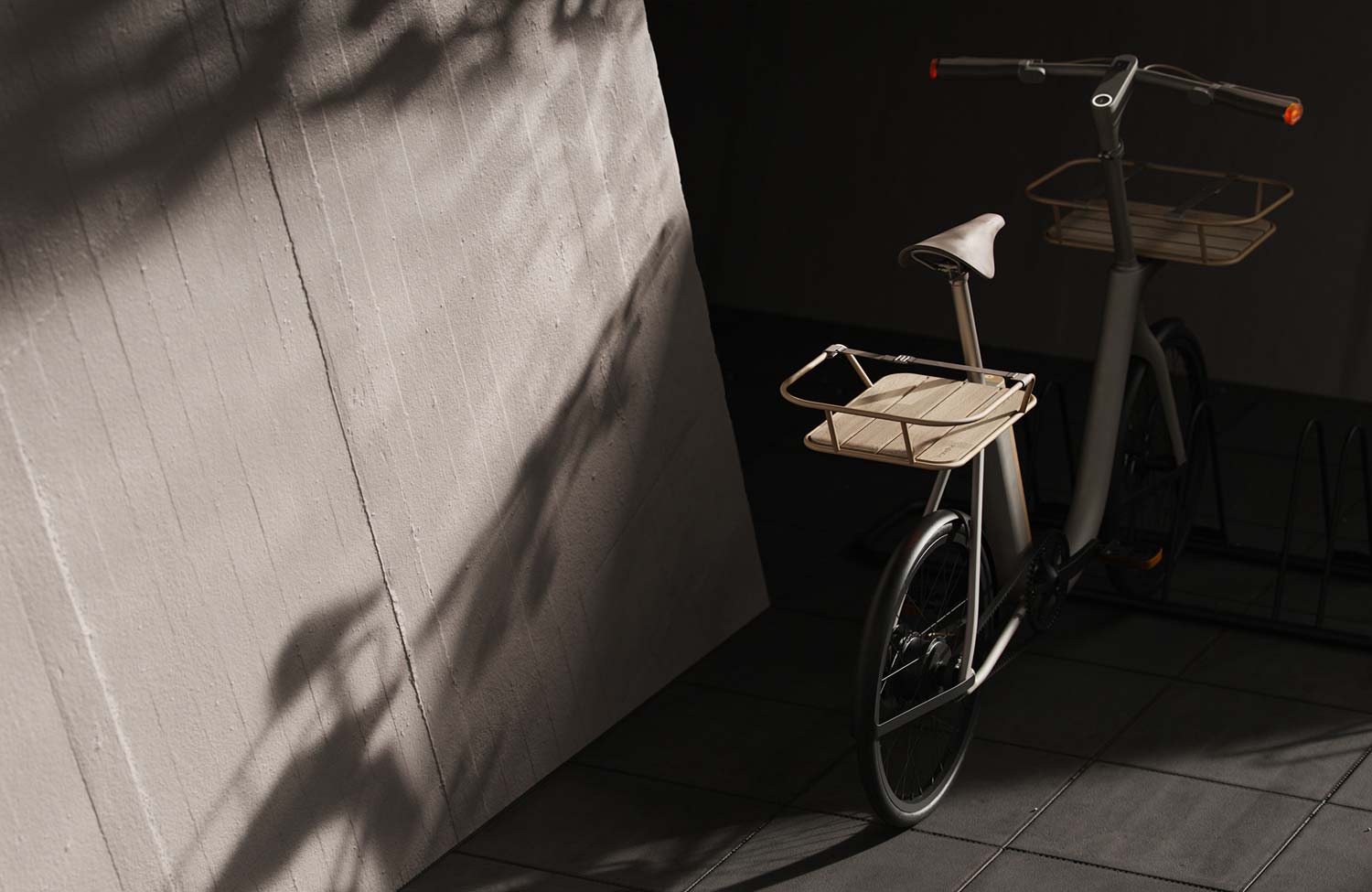 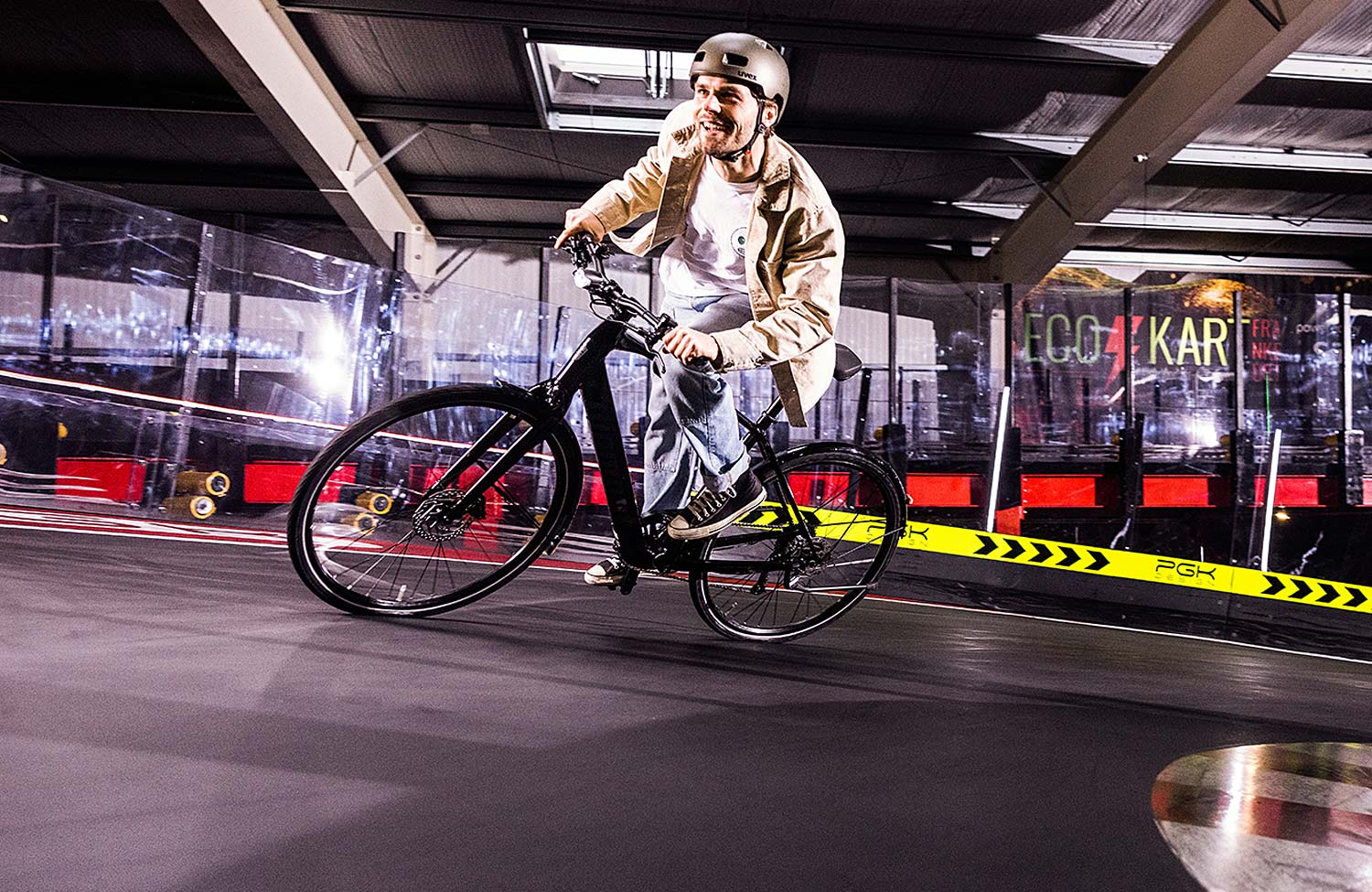 2 thoughts on “The Ampler Stout being tested: A fully equipped and comfortable e-bike”