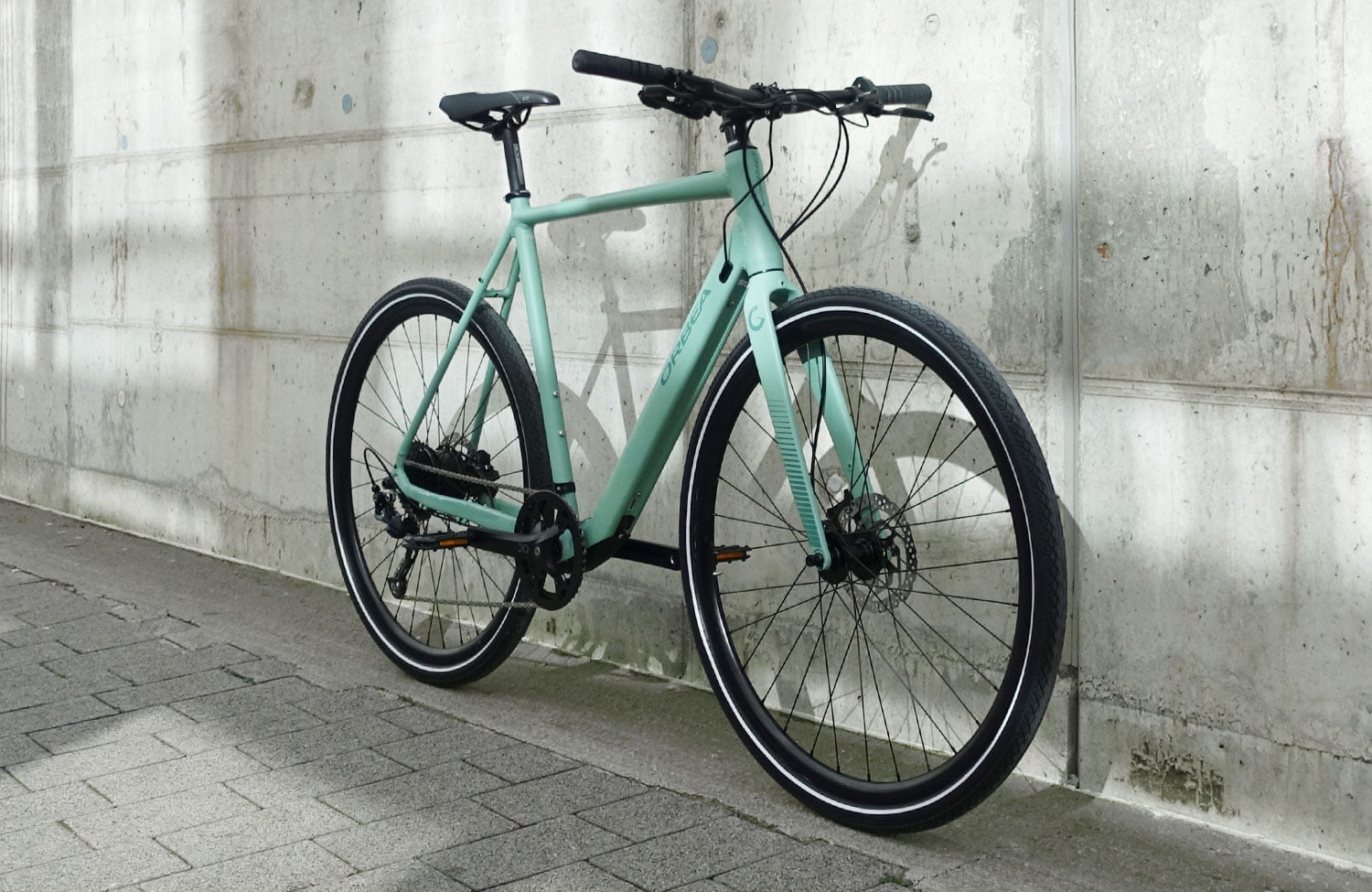 The Orbea Gain F40 is an electrically assisted urban bike with almost invisible electrical components. The battery with 247 Wh capacity is fixed in the down tube, the motor is in the rear wheel and provides pedelec-typical 250 watts with a torque of 40 Nm. With a price of 1,899 Euros, the tested model is one of the cheapest of its kind. Some competitor models are far more expensive—and Orbea itself offers the same drive in other, sometimes even more expensive bikes. The test will show how this drive concept works in everyday life.

Compared to the previous year’s models, which were in some cases multi-coloured, Orbea has given the 2019 model series of the Gain Urban series a pleasingly minimalist design. The aluminium frames are always matt finished and available in black as well as in extraordinary colors: in addition to the mint green of this test model, the bike is also available in light blue and a bright red. The lettering is unobtrusively applied in the color of the frame and stands out mainly due to its glossy finish. All other parts of the bike are completely black. Thanks to the almost horizontal top tube, straight fork (which is made of carbon by the way) and the rims with a slightly higher profile, the bike also looks quite sporty. The almost invisible drive system also includes a subtle control button: On the top tube there is a small but precisely manufactured button with an LED ring called iWoc One and also a switch on the left side of the handlebar called iWoc Trio. So the bike does not need a display at all.

The Gain F40 is the entry-level model from Orbea’s Gain series. The configuration is also at this level: the Shimano Altus is a 9-speed derailleur system, as standard as the MT200 hydraulic disc brakes. The saddle Selle Royal Scientia A2 is not beautiful but really comfortable, the tyres in the 700x38C format from Kenda aren’t that grippy and also quite heavy. All in all, the basic components are nothing special but they do simply work—and that’s the main thing. If you want more here, you can either choose one of the other Gain Urban models (F30, F20, F10) with partly better equipment or upgrade the bike yourself.

As mentioned at the beginning, the battery with its about 248 Wh sits in the down tube. It cannot be removed for charging, but in case of service it can be removed via an opening on the bottom bracket. The charging socket of the battery is positioned between the down tube and the seat tube and is closed by a somewhat fiddly plastic cover. Once this has been done, things went on just as fiddly: instead of a magnetic adapter, a conventional plug is used here, which needs to be positioned exactly when plugging in—after all, there is a small arrow stamped on the plug, which indicates the correct direction. The charging process takes about 4 hours when the battery is completely empty with the charger supplied. During charging, the iWoc provides colour information on how full the battery is. The charger itself has only one LED, which switches to green when the battery is fully charged.

The free ebikemotion app displays precise information on the charge status – it runs under iOS and Android on smartphones and connects to the bike via Bluetooth. However, the app surprises with its supposedly exact indication of the capacity in Wh. In the model tested here, for example, the app shows a maximum of 237 Wh battery capacity at 100%. This means that the battery would already have delivered around 5% less power than the 248 Wh Orbea data sheet indicates. This deviation is certainly not serious, but there are also some reports in which the displayed capacity is significantly lower. As a user you are therefore rather insecure: neither is it clear how reliable the data of the app is, nor do you know which battery performance tolerances lie within the normal range. From the manufacturer’s point of view, too, it would certainly have been wiser to display only a percentage here.

Apart from that, the current version of the app is basically no masterpiece: it should be able to record trips, for example, but the connection always fails after a few minutes. In addition, the interface with its many different font sizes looks a bit confused. Maybe a few updates will be needed before the app can be used satisfactorily. However, basic information such as the speed information is displayed without any problems.

One more word about the “problem” that the battery cannot be removed for charging: here you should definitely consider your personal driving profile. For example, if you ride rather short distances every day, you may only have to recharge your bike once or twice a week—which is much less annoying than having to move your bike to the charger or socket every day.

First of all a small excursion: Other e-bikes of this class (such as those of Coboc and Ampler) are equipped with a torque sensor. This ensures that the power of the motor is synchronized with the pedalling force of the rider. The result is a harmonious riding feeling that comes very close to classic cycling: If you pedal more strongly, you get more support.

But now exactly this measurement of the torque is missing in the Mahle ebikemotion drive; instead it is only registered whether the crank turns. If this is the case, the motor provides its full power (depending on the selected support mode). Admittedly, we were sceptical about this system, with the concern that the wheel would push you around more than you would be actually challenged in active cycling. But already after the first meters it shows up that this is not the case. On the contrary, the operation of the ebikemotion drive can be described as successful.

The support starts harmoniously with the first pedalling, at the highest support level you will notice a good acceleration – but in total the drive is very balanced and the movement of the bike still feels like riding a bike! This is also supported by the quiet operation of the drive: you only hear a slight humming noise in a quiet environment, but this is already overlaid by ambient noise in city traffic or at medium speeds. Ultimately, the relatively low weight of the bike also contributes to the natural riding feel of a classic bicycle: The bike tested here weighs 15.4 kg in the L frame size.

This means that the bike can still be driven well even with the drive switched off, especially as the engine then does not offer much drag. In everyday driving, this is rarely done because the bike offers much more fun with the drive switched on. However, when you reach the limit of 25 km/h you have to get along without a motor anyway, because the motor then has to adjust its support according to the EU pedelec guidelines. The transition is smooth and hardly noticeable – the balanced setup is also visible here. The same applies if you return to the range below 25 km/h and the motor starts again.

The three drive modes are designed quite differently: The smallest support level is slightly noticeable and rather gives you the feeling of balancing rolling resistance and headwind. With the two more powerful levels, on the other hand, the bike delivers significantly more power and accelerates noticeably on the flat.

Making claims about the range of the battery is difficult because it always depends on the driver, driving profile and route. As an example, a 56 km trip with ascents and descents of 370 meters each is shown here. Driving was always in lowest and middle level, with ascents the strongest driving mode was activated. In the end, 18% of the initial 100% capacity were still left. If you calculate this consumption, you would get a total range of about 68 km.

Apart from the electric drive, the Gain F40 is largely inconspicuous: The components are doing their job, the brake system seems to be sufficiently dimensioned for urban use and the 9 speeds are very good in the city. Only the top tube is surprisingly short for the frame size: The seat position of the Gain is more comfortable and less stretched than you would expect.

If you like it more sporty, you can mount a slightly longer stem. But that’s not all: thanks to its low price, the F40 is also an ideal starting point for further modifications – for anyone who wants to further customize the bike in terms of weight, appearance or equipment.

Orbea seems to have scored a hit with the Gain series: The Gain F40 tested here offers all the technical advantages of the Mahle ebikemotion drive, combined with solid basic equipment for a sporty urban bike. But the real surprise is the price of just under 1,900 Euros – the F40 is currently the cheapest of the minimalist e-bikes with largely invisible technology. It is up to each individual to decide whether the concept of the permanently installed battery is suitable for everyday use. On the plus side, however, there are the benefits of a lightweight and optically elegant bike. The drive system is technically quite simple, but proves to be absolutely satisfying in everyday use and significantly increases the fun of cycling!