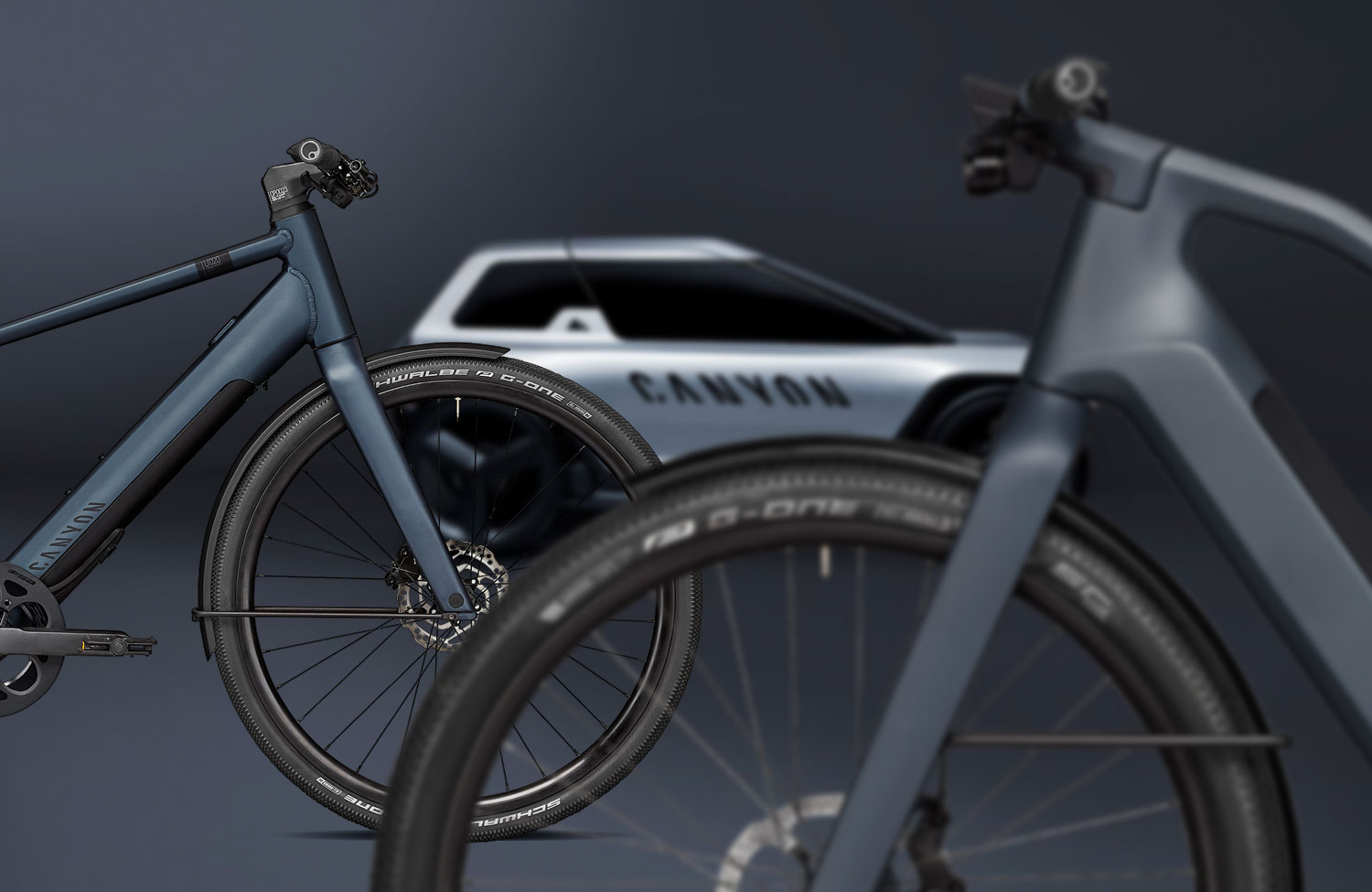 Somehow it was in the air: Already with the release of the electric model Roadlite:ON one year ago it was clear that sooner or later a purebred urban bike with electric support must come from Canyon. In the meantime, the Pathlite:ON, a more tour-oriented bike, was brought to the market, and now the time has finally come: It was the calm before the storm, so to speak, because with two new model series and an exciting vision of the future, Canyon makes it clear that they have dealt intensively with the topic of urban mobility.

Both new model series follow different concepts, which is ultimately also reflected in the price: The new Precede:ON line, for example, shows what is currently state of the art: From the ultra-strong mid-motor, pure lightweight carbon frame with integrated stem handlebar unit, you can see what is possible. In addition there is the more moderate Commuter:ON series, which offers some similarities to the already mentioned Roadlite:ON. Here, the focus is on a compact and light drive, the frame is made of aluminum.

Keyword Frame: Both series come with a classic diamond frame as well as a version with a trapezoidal or deep entry frame for comfortable entry. But let’s take a look at the model series in detail:

Canyon itself describes the new model series as an “all-round carefree package for the city”, which may well be true: The drive used is the Bosch Performance Line CX drive, which should offer an abundance of power — but the motto here was probably too much power rather than too little. It is also the latest and most compact generation of motors from Bosch, which was certainly another reason for using this drive.

Depending on the model, the drive system is combined with the modern Gates belt drive and the continuously variable Enviolo CA automatic transmission on the Precede:ON CF 9 or with a Shimano Deore XT derailleur on the Precede:ON CF 8 with 12 gears. The battery used is always the InTube model from Bosch with 500 Wh, which is integrated in the frame — but can be removed at any time for recharging.

The optical highlight is certainly the integrated stem handlebar unit, which makes the wheel look like a single piece. The new Bosch Kiox display, which provides information about the ride data, is positioned centrally. By the way, you will search in vain for open cables or trains: In cooperation with TRP, Canyon has developed its own brake levers which hide the brake lines internally — this not only looks good, but also ensures that the lines are protected in the best possible way.

Despite the carbon frame, the weight of the Precede:ON should not be underestimated, if only because of the drive. And also the price shows that we are dealing with the top models. The Precede:ON CF 9 with belt drive and automatic transmission, for example, weighs an impressive 22.15 kg and costs 4,869 euros. The Precede:ON CF 8 is slightly lighter at 21.06 kg, the price here is 4,189 Euro. In addition to the diamond frame, the bikes are also available with a trapezoid frame, with Champagne and Anchor Grey as colors.

Detailed information about the new Precede:ON can be found in this article.

Lighter and more affordable are the models of the new Commuter series. The compact mid-motor from Fazua is used as drive. Although this engine is significantly behind Bosch’s CX drive in terms of performance data, it should still provide sufficient power — especially since the entire Commuter bike is also significantly lighter at 17.6 kg. The integrated battery has a capacity of 250 Wh and can also be removed for charging.

The Commuter is also available with the new 12-speed Shimano XT gears, but there is no alternative with hub gears and belt drive. This is a real pity, because especially in urban use the advantages of an encapsulated hub gearshift and even more so the advantages of a clean belt drive come into their own. Why Canyon does without this option seems unclear at the moment.

Although the cockpit does not offer the consistent integration as seen in the Recede:ON, there is a new solution: handlebars and stem form a unit which is opened in the middle of the front. Here all lines go into the frame, which also provides a clean look and high protection.

The Commuter:ON 7 is available in the two colors Chamagne and Dark Navy and costs 3.219 Euro. Besides the diamond frame, the bike is also available with a trapezoidal frame.

Detailed information about the new Commuter:ON can be found in this article.

Is there a car coming from Canyon now? You might think so, but in fact this Future Mobility Concept is more of an e-bike in the shape of a car. You have to pedal and the steering is under or next to the driver’s seat, as on many recumbents. As a driver, however, you sit in an enclosed capsule that protects you from wind and weather and also offers enough space for a child, shopping from the supermarket or some luggage. The concept study is a vision of how the topic of urban mobility could be expanded in the future. If you would like to take a closer look at the topic, you can find all the information about the Future Mobility Concept here at Canyon.