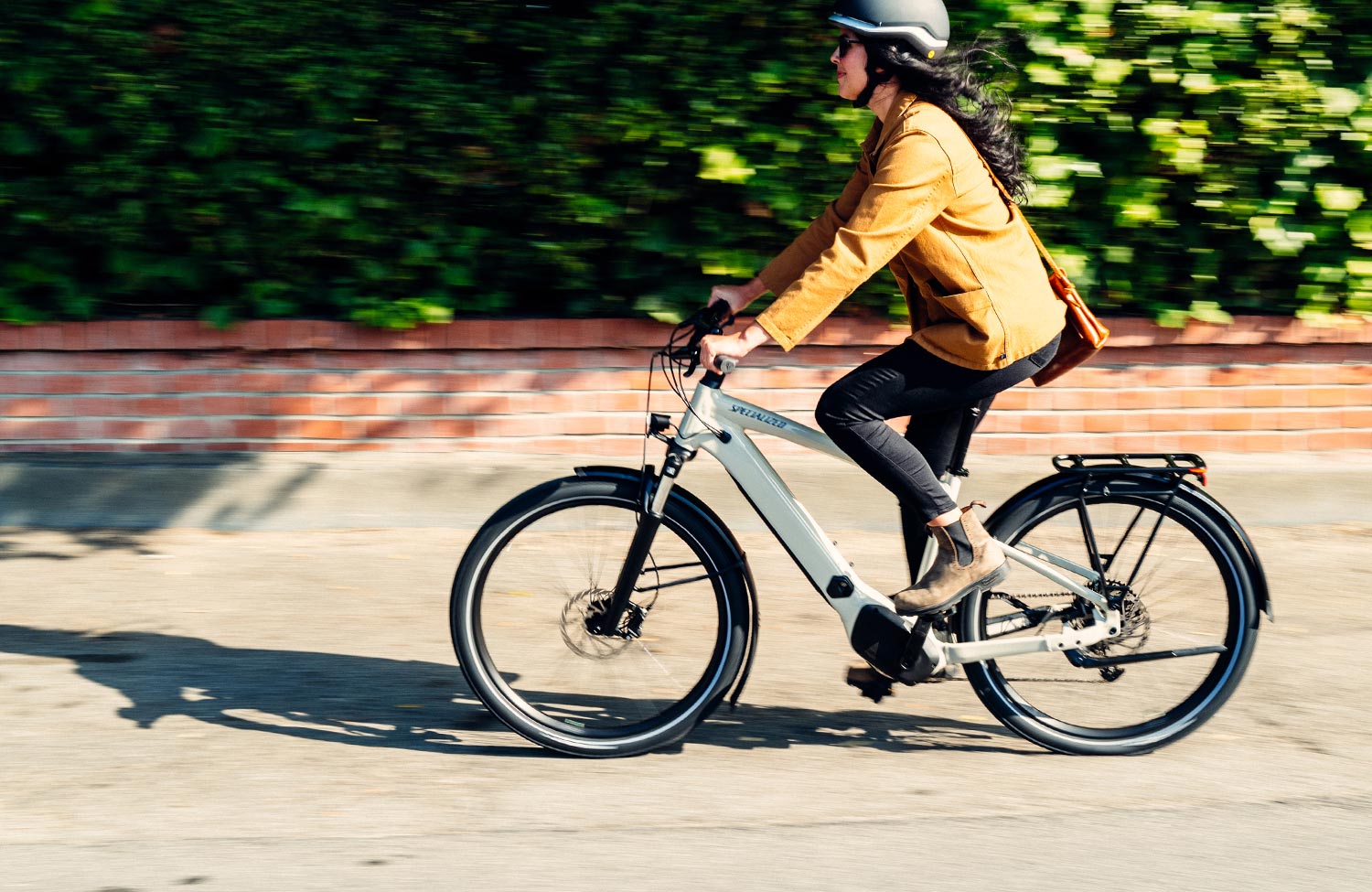 Specialized was active in the field of electric urban bikes at a very early stage and has had the popular Turbo Vado series in its range since 2016: these are solid, comfortable e-bikes suitable for everyday use with a powerful motor, which was developed together with Brose. Over the years, the bikes have been refreshed again and again, but remain largely unchanged in the essentials. But that is now changing!

The new features at a glance

With the 2022 vintage of the Vado series, innovations are now already recognisable at first glance: for example, they are saying goodbye to the previous frame design, in which the down tube became wider and wider in the direction of the motor. Instead, the down tube is now constantly the same width and open towards the underside — because the battery can now be removed in this direction.

The engine is the latest Turbo Full Power 2 generation. Depending on the model, riders have between 50 and 90 Nm of torque at their disposal, and the motor is still said to operate very quietly. And there are also innovations in the battery: with a capacity of up to 710 Wh, a new peak value is set for the Vado models, previously the maximum value was 600 Wh. The drive is controlled via a compact button on the handlebars and the MasterMind TCD, a compact and modern display positioned centrally on the handlebars.

In addition to current riding data, the display now also shows common functions such as navigation — made possible by the wireless connection with the Specialized smartphone app. But that’s not all: the new Vado models also offer the option of locking the bike via smartphone to protect it against theft. The electric drive is then deactivated and can only be reactivated via the app. Firmware updates over the air are also possible, and the desired cadence of the automatic transmission can be set on the display.

Automatic transmission? That’s right, another new feature on the Vado bikes! The Enviolo AUTOMATiQ continuously variable automatic transmission is available as an option on the top model, and the Enviolo City continuously variable transmission is also new on the entry-level model. The two hub gears are combined with the clean and low-maintenance Gates Carbon Drive belt. If you still want to use a conventional derailleur, you can of course do so — all bikes are also available with it.

And another new feature of the display, this time for road safety: in combination with a Garmin radar on the bike’s luggage rack, there is a visual, acoustic and haptic signal based on the distance and speed of an approaching vehicle. The sensor is fitted as standard on the top models, and can be retrofitted on all others.

Compared to the innovations, the rest of the equipment reads rather unspectacular, but also offers some highlights. For example, the Spanninga Commuter Glow taillight, which is elegantly installed as a thin strip of light in the rear rack. The latter comes from Specialized itself and can hold up to 27 kg. The new Specialized pannier bag, for example, can also be placed there. The Ebike Power E115 headlight from Lezyne is used at the front, and mudguards complete the Commuter equipment.

As with the predecessor, the priorities for the new Turbo Vado are extensive equipment, performance and ride comfort – which then also pushes up the weight. Accordingly, the new models weigh between approx. 25 and 27 kg. If you prefer a lighter e-bike, Specialized offers the Turbo Vado SL (reviewed here).

The main differences between the model variants

Deviating from this are the other differences of the Vado bikes with hub gears:

All models are available in the three colours Cast Black, Red Tint and White Mountains with diamond frames or comfort frames (then with the addition Step-Through in the model name) in four sizes each from S to XL. Piece by piece, the first bikes will be available as early as next month.